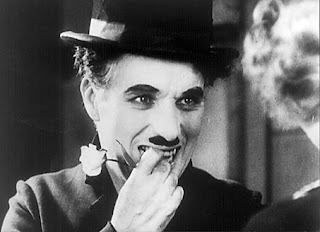 BASIC PLOT: A Tramp (Chaplin) falls in love with a young blind woman (Cherill) who sells flowers on the street as a means of earning money for herself and her grandmother. She hopes to raise enough money to have an operation that will restore her sight. The Tramp does everything in his power to raise money for her, including befriending a wealthy duke and entering a boxing match. The blind woman thinks that the Tramp is a wealthy benefactor and, since he's fallen in love with her, he doesn't want her to know that he's actually poor.

FAVOURITE SCENE: It's the final scene of the film. The blind girl has had the operation and her sight is fully restored, although she never discovered the identity of the man who helped her. She now owns her own flower shop where she witnesses the Tramp being harrassed by people on the street. At first, she laughs along until she notices the way the Tramp is looking at her, through the window of her store. This is probably one of my favourite Chaplin reactions, as he's staring at her through the glass. At first he's shocked to see her, then he just stands there, so thrilled that her life took such a turn for the best. It's obvious he still loves her. Then, she goes outside on the street, to give him a flower and some money. When she touches his hand, she recognizes how it feels, and it slowly dawns on her that the Tramp was the young man who so selflessly raised all that money for her. The title card for Chaplin reads, "You can see now?" to which the girl responds, "Yes, I can see now." Cue tears.

WHY?: Without using actual words, Charlie Chaplin was able to convey one of the most honest and moving  reactions to love that I've ever seen on film. His face is that of genuine happiness.

In high school, my English teacher showed us Modern Times. Everyone knows the iconic image of Chaplin's body flipping around in the wheel of a giant machine. I enjoyed the film but it still took me a few more years to fully appreciate the talent that was Charlie Chaplin. About six years ago I decided to watch City Lights based on the recommendation of one of my friends. He promised me that the ending of the film would blow my mind. But that's all he said. He was right.

I remember watching the American Film Institute's Top 100 Films of All Time. City Lights made the cut (at number 10, if I'm not mistaken) and AFI aired a clip of the late Jack Lemmon commenting on how much he loved the film, specifically the famous final scene. Lemmon choked up just talking about.

Everything about the finale is perfection. Usually, when a film makes you cry, it's out of sadness. Something tragic that has happened to the film's hero. City Lights is part of the small percent of Hollywood classics that make you cry tears of happiness. Even if you've never seen a Chaplin film, please do yourself the favour and watch the clip. It never ceases to amaze me, every time I watch it.
Posted by Laura at 6:48 PM 2 comments:

Book Review: Somebody, The Reckless Life and Remarkable Career of Marlon Brando 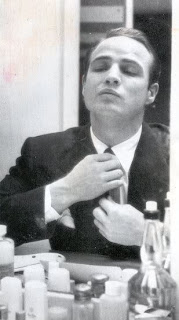 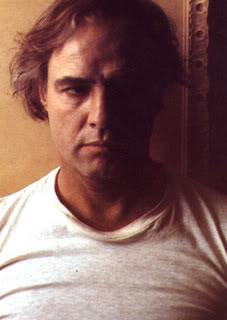 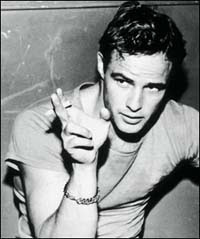 SOMEBODY: THE RECKLESS LIFE AND REMARKABLE CAREER OF MARLON BRANDO (2008)
By: Stefan Kanfer

"To the end of his life, Marlon Brando insisted that he had done nothing special. In his view acting was a trade like plumbing or baking. The only difference was that he played characters instead of unclogging drains or kneading loaves of bread. This was not false modesty; he believed what he said. But what he believed was untrue."
~Stefan Kanfer (opening passage from "Somebody")

Film historian Molly Haskell once wrote, "there is only one Brando." In his 2008 biography on the late actor, Kanfer goes above and beyond in proving Haskell's observation. In only 323 pages, Kanfer manages to do what few other Brando biographers have done; portray the man as he really was, without including empty rumours or petty gossip and speculation. Kanfer portrays Brando as a flawed, complex human being with an incredible talent.

Kanfer provides context to the life of Brando, from his early childhood in Omaha to his death in 2004, by setting the stage with issues that were going on in the world at the time. When Brando was born in April of 1924, two youths kidnapped and murdered a 14-year-old boy in a Chicago suburb. It was the time of Prohibition. Since the Great War, the area where young Marlon grew up saw a rise in its black population, causing resentment and racial strife. Not only do you learn about Marlon Brando, but Kanfer makes sure his readers are aware of the America in which the actor was growing up.

It becomes a historical text in so many ways. Kanfer discusses America, classic Hollywood and the sex, drugs and rock n'roll culture which Brando witnessed. It helps the reader to better understand why Brando did what he did and why certain causes were closer to his heart than others.

The book is full of interesting anecdotes that Kanfer dug up through his extensive research, including the fact that young Marlon was always drawn to those who were seen as social outcasts. As a child he befriended the only black boy in one of his classes and took a female classmate, who had issues with her vision because her eyes were crossed, to the school dance. Later in life, this could still be seen in his friendship to Michael Jackson, even when the King of Pop was on trial for child molestation charges, and in his dedication to the plight of Native Americans.

Despite these good deeds and his loyalty to those friends who stood by him, Brando had a quick temper and always had volatile relationships with the women in his life. Interesting fact: actress Rita Moreno once attempted suicide after Brando broke up with her. Their relationship, both personal and professional, always remained rocky from then on. Brando was father to ten children, although there are at least two others who claim they are his as well. He never connected on an emotional level with any of his three wives and would often go months, even years, without seeing some of his own children.

However, Brando often considered himself an activist, first and foremost. He battled against racial segregation, he fought to help establish a Jewish state and took up the cause of Native Americans. After the 1968 murder of Martin Luther King Jr., Brando made it his mission to help further the works of the late King Jr. in the public eye.

Kanfer details Brando's time in Tahiti, his love/hate relationship with his acting profession and the Hollywood friendships and enemies (such as his nemesis, Frank Sinatra) he made along the way. Kanfer believes Brando was happiest in Tahiti, although the actor often left for Hollywood for long stretches of time. It seemed that even though Brando hated what Hollywood represented, he was always drawn to film.

Brando often claimed he made films because of the large paycheques (which would help him when it came time to pay what he owed in his divorce settlements and child custody disputes). However, his comments on acting make for some of the best moments in Kanfer's account. Despite his flippant attitude towards his profession, Brando was a master of his craft and, without ever admitting it, seemed to be aware of that fact. One of his most famous interviews took place in his house in 1994. The infamous hour-long Larry King interview truly captures the persona of Marlon Brando, and Kanfer's novel manages to do that as well.

Brando never abused drugs. He drank very little. His vices? Sex and food. Even though he remained married to his third wife, Tarita, until his death, Brando had three children by his housekeeper and ate so much that his weight ballooned in a short span of time.

Kanfer's engaging prose and film knowledge go a long way towards making this one of the best and most unbiased celebrity biographies out there. Regardless of whether or not you are a fan of Marlon Brando, his life and unique personality make for a compelling read.

BRANDO QUICK FACTS
-Born on April 3, 1924 in Omaha, Nebraska
-Nickname: Bud
-Parents: Marlon Brando Sr. and Dorothy "Dodie" Pennebaker Brando
-Siblings: Two older sisters, Frances and Jocelyn
-His mother became a depressed alcoholic, his father was a traveling salesman who slept with other women
-Pupil of legendary acting teacher, Stella Adler
-Revolutionized film acting, used the Method Approach in his performances
-Tennessee Williams re-wrote the character of Stanley Kowalski (A Streetcar Named Desire) to suit Brando's Broadway portrayal of the character
-First screen role: as a paraplegic in 1950's The Men
-Most famous roles: A Streetcar Named Desire, Viva Zapata!, On the Waterfront (for which he won his first Oscar in 1954), The Godfather (for which he won his second Oscar in 1972) and Last Tango in Paris
-In 1990, son Christian Brando shot and murdered Dag Drollet in Marlon's own house; Marlon attended Christian's trial and even testified in court
-Penned his autobiography, Songs My Mother Taught Me in 1994
-Lived next door to close friends Jack Nicholson and Michael Jackson
-Brando's son, Miko, was Michael Jackson's bodyguard
-In 1995, daughter Cheyenne committed suicide at the age of 25
-Married three times: #1 Anna Kashfi (one son, Christian), #2 Movita Castaneda (two children: son, Miko and daughter, Rebecca), #3 Tarita Teriipaia (two children: son, Simon Teihotu and daughter, Cheyenne)
-Children with his longtime mistress and housekeeper, Maria Christina Ruiz: Ninna, Myles and Timothy
-Other children: Stefano Brando (mother unknown) and one child he adopted on his own, Petra Barrett Brando
-Two others claim they are Marlon's children: Maimiti Brando and Raiatua Brando
-Final film: The Score (2001) with Robert DeNiro and Edward Norton
-Gave acting lessons at his house in L.A. during the last two years of his life: Leonardo DiCaprio, Sean Penn and Edward Norton are among those who attended group acting sessions with Brando
-Died on July 1, 2004 in Los Angeles at the age of 80 of complications from pneumonia, diabetes and pulmonary fibrosis
-Considered the greatest screen actor of all time
Posted by Laura at 6:50 AM 6 comments: