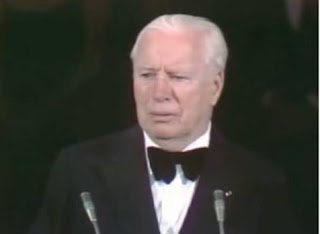 
I don't have many favourite Oscar speeches -- I find that they tend to go on for too long and sometimes seem a little forced. Or, maybe it has more to do with the fact that, come Oscar night, we already know who is going to win. That didn't used to be the case but now the mystery of who will win has been stolen from the Oscars by the slew of pre-Oscar awards shows (most notably the Golden Globes and Screen Actors Guild awards). The Oscars have never been more dull, predictable and overrated than they have been these last couple of years. But, back in the day, there were some great moments.

In 1972, after years of exile, Chaplin was welcomed back into the United States to receive his Honourary Oscar at the 44th Academy Awards. I wasn't born in when this happened but, as a big Chaplin fan, I saw this clip years ago when doing research on his life for a film essay. The clip of Chaplin stepping onto the stage of the Dorothy Chandler Pavilion, where the Oscars were once held, was memorable for a variety of reasons.

1) It was Chaplin's first public appearance in the United States in 20 years.
2) His appearance received the longest standing ovation in Oscar history, lasting for 12 full minutes.
3) Most importantly, Chaplin is genuinely humbled. The joy is evident on his face. Here's a man who likely had no idea how he'd be received by the audience when he stepped on the stage and his reaction is one of the most sincere I've ever seen at the Oscars.

Without ego, Chaplin steps up to the mike and say's one of the shortest thank-you speeches in Oscar history -- but it also happens to be one of its greatest ...because it's so genuine. Short and sweet, just like Chaplin.

"This is such an emotional moment for me. And words seem so futile, so feeble. I can only say, thank you for the honour of inviting me here. Oh, you're wonderful, sweet people. Thank you."


The embedding is disabled on YouTube, but you can WATCH IT HERE.

What is your favourite Oscar speech?
Posted by Laura at 6:45 PM 10 comments: