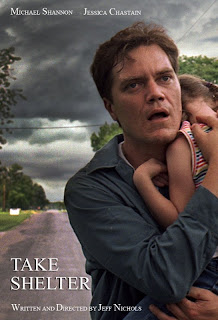 "You think I'm crazy? Well, listen up, there's a storm coming like nothing you've ever seen, and not a one of you is prepared for it."

A quietly unsettling indie hit, Take Shelter is more character study than apocalyptic thriller, leaving the audience just as overwhelmed and perplexed as the central protagonist -- a man who literally lets fear rule his life.

The setting: rural Ohio. Hard-working and loving family man Curtis (Michael Shannon) is plagued by shockingly realistic apocalyptic visions while he sleeps. Curtis isn't sure if he's inherited schizophrenia from his mother or if his visions are real -- a glimpse into the very near future. He decides to err on the side of caution and builds a survivalist shelter for himself and his wife, Samantha (Jessica Chastain), and young daughter, Hannah (Tova Stewart). Curtis is not a particularly religious man -- instead of looking up Bible passages to uncover answers to his violent and chilling visions, he checks out books on psychiatry from the local library instead. The overriding theme in the film is fear -- fear of economic hardship, fear of health problems, fear of losing those we love most, and fear of death and the end of the world. Fear often influences our greatest decisions and it's what ultimately sparks Curtis into action, regardless of what those around him think.


Take Shelter has a slow-burning narrative, carefully revealing the frustration and fear felt by a man unraveling right before his family's eyes. Despite its leisurely pace there's never a dull moment.

From a visual standpoint alone the film is stunning -- the apocalyptic visions are chillingly vague and appropriately ominous; like Curtis, you aren't sure exactly what they mean ...or if they even actually exist. With its smart use of CGI, the film conjures realistic thunderstorms and inky rain showers, using them to greater effect than any big-budget blockbuster.

In the lead role, Shannon is remarkable. His quietly commanding performance as Curtis is one of the highlights of 2011 and it's fascinating to watch this gentle character struggle with inner demons he just doesn't understand. A man of few words, Curtis is hesitant to explain his situation to his loving wife -- in fact, his pent up frustration and fear only boils over once in a shocking fire and brimstone speech that rattles those around him, himself included.

As Samantha, a religiously devout woman who dotes on her husband and young daughter, Chastain makes another case for why she's the biggest star of the year. Her performance is the definition of a supporting player -- she may be secondary in the plot but she makes her presence felt with a quietly beautiful performance. It'd be a shame if this wasn't the film she was recognized for at the Oscars.

Although the final scene may polarize moviegoers, Take Shelter leaves an undeniable impact. It's an intelligent piece of cinema that provokes a powerful response. Up-and-comer writer-director Jeff Nichols has crafted a resonating film that utilizes our societal fears to propel the story forward.

Part psychological thriller, character piece and family drama, Take Shelter is one of the highlights of 2011.