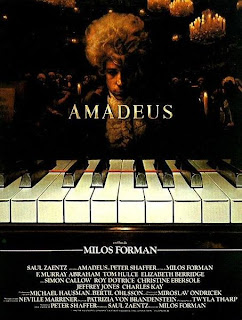 
"From now on we are enemies, You and I. Because You chose for Your instrument a boastful, lustful, smutty, infantile boy and give me for reward only the ability to recognize the incarnation. Because You are unjust, unfair, unkind. I will block You, I swear it. It will hinder and harm Your creature on earth as far as I am able."
~Antonio Salieri (F. Murray Abraham) in Amadeus

I love poster art and I have at least a couple dozen I could have made into a list. Too much work, though, to be honest. So ...

My number one favourite is the international version of the Amadeus (1984) poster. I'm so used to seeing the shrouded Don Giovanni version, where he's spreading his arms over the darkened city of Vienna. I love it a lot but it's so often associated with the film or Peter Shaffer's play, so it lost some of its impact for me.

The international version, on the other hand, is darkly beautiful in a different way than the official poster. Why this never became a more popular image to associate with the Oscar winning film, I'll never know.

You've got the reflection of Wolfgang Amadeus Mozart (played by Tom Hulce) in the piano, with the piano keys in the foreground. Only half of Mozart's face is visible and in the background, a masquerade takes place. The poster suggests a film with a moody, yet lavish, atmosphere -- perfectly capturing exactly what the film is all about.