Day 8: FAVOURITE OPENING/CLOSING CREDITS
When I watch films at home I tend to fast-forward opening credits. There are some exceptions to the case, though. When a director makes a statement, either visually or in terms or story or character, I will stop and take notice and watch the credits every. single. time.

Some of my favourite opening credits are:

-A Clockwork Orange (1971) for scaring the shit out of me and being perfectly Kubrickian. Malcolm McDowell + a glass of milk = evil
-Whatever Happened to Baby Jane? (1962) for managing to put a car crash and a cracked glass doll into the same sequence
-Psycho (1960) for its score and the fact that it was ahead-of-its time
-Ed Wood (1994) because it couldn't be more Ed Wood if it wanted to be
-Amelie (2001) for its whimsical introduction of its heroine as a young child
-Se7en (1995) for its success in setting up the dark, ominous tone of the film
-Catch Me If You Can (2002) for animating the adventures of the anti-hero at the centre of the story
-Watchmen (2009) for simply being awesome and integrating actual historical footage into the sequence with Bob Dylan on the soundtrack

Sometimes, though, it's simply just a matter of "less is more". One of my favourite opening credits is Fargo (1996). Bright blue sky. Dead of winter. White snow. A car passing the camera's frame. The word Fargo in black against a screen of blue. Perfect choice of music. And, so starts the Coen Brothers masterpiece. 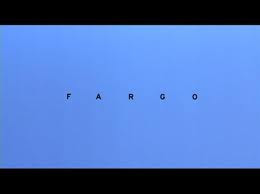 Some of my favourite closing credits are (although there aren't as many):


-Lemony Snicket's A Series of Unfortunate Events (2004) for its wonderful, old-school animation that makes you wish the film itself had been filmed that way

-Moulin Rouge! (2001) from being all overly melodramatic
-The Adventures of Priscilla, Queen of the Desert (1994) for featuring a drag queen lip-synching to Vanessa Williams and being a perfect conclusion to an outlandish little film