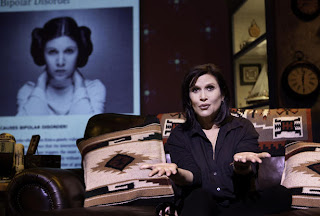 A week ago today I saw Carrie Fisher's one-woman show, Wishful Drinking, at the Royal Alexandra Theatre in Toronto. Based on her 2008 memoir, the show has been a smash hit and even had its own HBO special.

So often associated with her iconic role as Princess Leia in George's Lucas' Star Wars franchise, few fans likely take the time to distinguish the differences between Leia and Carrie Fisher herself. After the show last Thursday, she ceased to be Princess Leia for me. Now she's simply, Carrie Fisher -- comedienne, author, businesswoman and a star of the stage.

We all know Fisher is funny. She has a knack for nailing her lines in one episode stints on hit TV shows like Sex and the City and 30 Rock. But there's no real way of preparing yourself for her refreshing, hilarious, brutally honest and self-deprecating account of her own life story.

And what a bizarre, and often tragic, life she's led! As Fisher herself said at one point, "If I didn't make it (my life) funny, it would just be true. And I couldn't have that."

Fisher structures her show as a series of vignettes -- starting with the sudden death of her close friend, Gregory R. Stevens, in 2005. She woke up to find his corpse lying in the bed next to her. Watching her relate the story full of emotion and humour is fascinating to witness. (You can check out her blog entry on the subject at her official website).

She goes from that heavy opener to her college course-like tutorial titled "Hollywood Inbreeding 101" in which she uses a pointer stick and a chalkboard to methodically walk the audience through the many relationships of her famous parents, singer Eddie Fisher and actress Debbie Reynolds.

She discusses everything from her broken home to her father's countless marriages and affairs -- most famously with Elizabeth Taylor, her mother's best friend at the time. When Taylor's husband, Mike Todd, died in a plane crash, her father Eddie immediately ran to support Taylor. "Daddy rushed to her side, than he worked his way around to her front and finally wound up comforting her with his penis."

But what is clear from Fisher's show is that, despite her often strained relations with members of her family, she's a woman who loves them dearly. Whether she's recounting the time her aging father accidentally ate his hearing aids or about how her mother insists on stating her own name every time she calls on the phone ("Hello, dear. It's your mother ...Debbie."), Fisher tells her life stories in such a hilariously candid and touching manner. When gushing about her 19-year-old daughter, Billie, Fisher memorably exclaims that "she's the best thing to ever come out of my body."

Unlike many celebrity memoirs Fisher is not asking her audience for sympathy. She openly blames herself for her own mistakes, saying it would be lazy to blame Hollywood and her broken home for her woes -- and, besides, her brother turned out to lead a perfectly normal and happy life; a rare exception for someone descended from Hollywood royalty.

She will quite openly talk about her bi-polar diagnosis and ECT treatments although she's a little more restrained in her delivery -- as Toronto Star theatre critic Richard Ouzounian wrote: "despite the jokes, quips, the gal-pal merriment, there is something seriously life-threatening underneath."

However, her energy is contagious and, if nothing else, drives home her overriding theme that life is what you make it. If only we were all brave enough to laugh at our faults and failures.