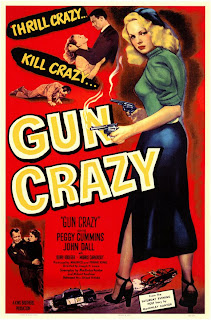 My latest Film Noir Spotlight entry for Next Projection. The seventh film on my list is Gun Crazy (1950).

A gun-crazy man sets his sights on a dangerous dame. Their shared infatuation with pistols – memorably captured in one of the most bizarre seduction sequences in American cinema – results in a whirlwind of criminal activity for this trigger-happy pair. A precursor to Arthur Penn’s 1967 classic Bonnie & Clyde, Gun Crazy is a stunning technical achievement capped off with two electric lead performances.


Originally released in 1950 as Deadly is the Female, the film came and went, rapidly falling off the radar when critics panned it and audiences failed to show up. Later re-titled as Gun Crazy, director Joseph H. Lewis’ once underrated gem is now recognized in films circles as an innovative crime drama that has since been included in the National Film Registry.

As a youth, Bart Tare (a young Russ Tamblyn) is sentenced to time in a reform school and, later, a stint in the military, after stealing a pistol. The aimless, gun-obsessed youth grows into an aimless, gun-obsessed adult (John Dall). His first day of freedom starts with time spent at a carnival with two former childhood pals and ends with him falling head-over-heels in love with an English sharpshooter named Annie “Laurie” Starr (Peggy Cummins). Their intense attraction is mutual and the two quickly wed and set out for a life spent robbing banks. Gun Crazy is an unfettered social commentary on gun worship in America. Based on a short story by MacKinlay Kantor, the film crackles with barely contained energy, fuelled by the chemistry between Dall and Cummins.

Lewis insisted on giving his actors breathing room, encouraging them to improvise dialogue, specifically during their heist scenes. The main bank robbery sequence at the centre of the film was shot in one long take from the backseat of the getaway car. Equipped with a groundbreaking portable camera, it elevated Gun Crazy above and beyond what a typical B-movie could achieve. It’s a beautifully executed series of events, from robbery to getaway, which later influenced the likes of Arthur Penn and Quentin Tarantino. You’re just grateful that, as an audience, you feel as if you’re an accessory to their crimes.

Bart is a killer shot, but he’s no killer. His love for guns contradicts his discomfort with the notion of murder. His years in the military didn’t harden him in that regard. Emotionally fragile, yet twitchy in his constant need to reach for his gun, Bart is a quietly sympathetic figure. He sees his gun as an extension of himself – his reason for living; that is, until he meets Laurie. He’s a fundamentally decent man who is easily swayed by a dangerous woman: in short, the archetypal noir protagonist. As Bart, the lanky and jittery Dall gives a charming performance; imagine Jimmy Stewart as a Clyde Barrow-type.

As Laurie, one of the most dominant femmes you’re likely to come across in a noir, Cummins is dynamite – both sexy and vulnerable, she exudes a fiery confidence. She hints at a violent past, but her nature is more primitive and bloodthirsty than even Bart knows. She’s an alluring enigma but her love for Bart is undeniably genuine, an interesting twist on the traditional femme fatale.

Dall and Cummins exude a raw sexuality rarely seen in American cinema at the time. Their romance is so believable that the quieter scenes they share together are just as compelling as their bank robberies. As Bart tells Laurie, they go together “like guns and ammunition.”

Gun Crazy remains as fresh and thrilling as it was during its initial release. It’s one of those quietly heralded Hollywood pictures that few audiences have seen. It deserves to be dissected, discussed and admired for its technical achievements and largely improvised performances from the exceptional Dall and Cummins. Captivating from start to finish, Gun Crazy is must-see cinema for any film connoisseur. It’s as entertaining as it is influential.