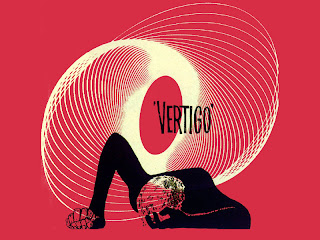 I recently re-watched the Alfred Hitchcock classic Vertigo for the first time in a couple of years. I'd forgotten how much I absolutely love this film! I decided to look up some comments by various reviewers from over the years and, while the majority reacted positively to the film, others blasted it as overrated and self-indulgent, which I felt to be a little harsh.

There always seems to be a great debate among movie fans: Which film was Hitchcock's masterpiece? Was it really Vertigo or was it Psycho, Rear Window or North By Northwest? Although I've always been partial to Shadow of a Doubt myself (I think it's his most underrated and overlooked film), but I believe that, after this recent re-watch, Vertigo was truly his masterpiece. All of his films are excellent in their own way, but I always end up coming back to this 1958 classic.

Five Reasons Why I Love Vertigo


1) The Film Noir Elements: Sure, it may not technically be classified as a film noir (although some have argued it can fit into the genre), but it plays out like a colourful homage to one. It has a whole lot of psychosis rolled into just one film. Mumbling, bumbling Detective John Ferguson (Jimmy Stewart) is an absolute mess and has this strong, overriding desire to "save" a seemingly unattainable woman (Kim Novak in the role of the femme fatale).

2) The Style: The aesthetically pleasing colour scheme is rich and vibrant -- and the focus on the bright greens and reds work really well in contrast to the dark, moody atmosphere of the film. Despite the sunny and cheerful colours, something sinister is always lurking beneath the surface.

3) The Supernatural Subplot: Before the second half of the film does a complete about-face in terms of plot, the first half plays like a creepy little supernatural thriller, complete with the ghostly possibility of the spiritual possession of Novak's character.

4) The Far-Fetched Plot: Some naysayers have criticized Vertigo by saying it has a meandering plot that ultimately serves no purpose. But, what some refer to as "slow-paced", I call a meticulous build-up of tension and suspense -- something that was Hitchcock's specialty. Yes, the plot may be improbable and far-fetched but, really, when was a film noir ever based in reality and gritty authenticity?


5) Jimmy Stewart & Alfred Hitchcock Together Again: The Master of Suspense and nice-guy Jimmy Stewart paired up a few times over the years, but never more successfully than in Vertigo. This is arguably Hitchcock's most nerve-wracking film. With its supernatural atmosphere and slow-burning tension, he envelopes you in the mystery. Stewart plays against the grain, as the neurotic, needy former detective suffering from an acute case of acrophobia. When the woman he desires turns out to be unattainable, he reveals his mental instability by moulding and shaping Novak's character to resemble the other. Stewart arguably did most of his finest work under the tutelage of Hitchcock.