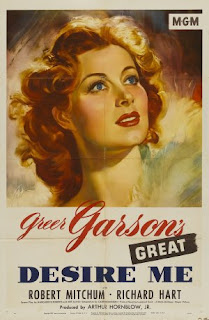 It's pretty safe to say that, well before the end of production on Desire Me, no one wanted to have anything to do with this oft-overlooked picture.

The specialty channel TCM aired the film last week, with host Robert Osborne detailing the multiple cast changes, script rewrites and revolving door of high-profile directors that all culminated in the film's ultimate plummet at the box office. Few remember the film today. This is not the picture that Greer Garson or Robert Mitchum are remembered for, thankfully.

In fact, the most intriguing thing about Desire Me is the fact that it was the first MGM film to be released without a director's name attached. Jack Conway, George Cukor, Mervyn LeRoy and Victor Saville all took a stab at helming the project, but ultimately left for a myriad of reasons -- namely the lack of artistic freedom and Garson's allegedly difficult personality on set.

It was LeRoy who finished the picture in the end, however, none of the directors wanted their names attached to the film so the studio went ahead and released it without crediting anyone.

Desire Me begins with an isolated house set upon the cliffs in Brittany. With a setting more suited to a film adaptation of Wuthering Heights, we discover that it belongs to Marise Aubert (Garson), a woman who is led to believe that her husband, Paul (Mitchum), has died in the field during the Second World War. When a man appears by the name of Jean Renaud (Richard Hart) he claims that he was her husband's closest companion during the war and that he witnessed Paul's death. Marise finds herself drawn to this personable stranger and sets out to lead a life with him as though he were a replacement for her dead husband. Marise and Jean's friendship is frowned upon by the gossipy villagers -- how could two unmarried strangers live together under one roof? As we learn via flashback, Jean is more than content with this living situation, having fallen in love with Marise based on a photo of her and Paul's stories about his loving wife.

As Jean himself claims in one particularly eerie moment: "I wanted to know what it was like to come home to my own house. My own wife."

While the audience has their guard up and can sense the emotional instability of Jean, he gradually crosses the line from lonely to creepy, with Marise a little slow on the uptake.

The acting, disappointingly, isn't particularly note-worthy. We've all seen Garson and Mitchum in far more engrossing and challenging roles. Granted, both are gifted actors and make due with what little is given to them in the script -- but it just isn't enough to truly rise above the material. Buried deep beneath this half-wartime love story, half-psychological thriller, Desire Me has a better movie waiting to come out.

The cinematography from Joseph Ruttenberg is gorgeous, lending the film a foreboding sense of danger through his keen eye. His visuals, combined with a lack of soundtrack in the climactic finale, briefly helps Desire Me rise above its scattered script. Eyes meeting through the mist, voices echoing along the cliffs, gunshots ringing out in the night, Ruttenberg's work is stunning. His cinematography allows for a sense of consistency in a film that is a narrative mess.

Desire Me is one of those forgotten classic films that you catch on TV late one night and are reminded as to why it has been forgotten in the first place. While there are stylistic elements that are certainly impressive, Desire Me will ultimately leave you cold.