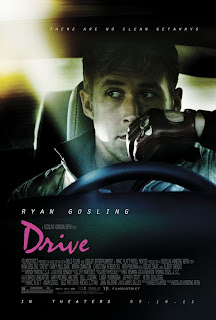 The Dutch director of Drive, touted as one of the must-see movies at this years Toronto International Film Festival, claimed he was very heavily inspired by both the late-director and 80s movies, in general.

With its 80s-influenced soundtrack and bright pink title credits, Drive has a certain Hughes feel to it -- only imagine Hughes' angst-ridden teen characters going on a violent rampage and brutally murdering each and every one of their high school tormenters in an increasingly violent (and creative) manner. In a recent interview about the film, both Rehn and star Ryan Gosling said they were influenced, in particular, by Pretty in Pink (1986).

"One thing we both agreed on was that we loved 'Pretty in Pink' and that it would have been a masterpiece if it was more violent," Gosling said. "In some ways we tried to make a violent John Hughes movie."

Rehn and Gosling brought up that same idea once again last night during the Q&A session at the North American premiere of the film at the Ryerson University Theatre. So, go into the movie envisioning a really evil, fed-up Duckie from Pretty in Pink and just take it all in.

A Hollywood stunt driver by day, a getaway driver by night, the man known only as Driver (Gosling) discovers that he's a target after a heist gone wrong. With baddies Bernie Rose (Albert Brooks) and Nino (Ron Perlman) hot on his tail, Driver rips and roars through the streets of L.A. while simultaneously trying to romance a young mother (Carey Mulligan) who is, at first, completely unaware of his darker side.

What Drive lacks in character development and plot, it more than makes up for in style. It's essentially a blood-soaked homage to both B-movie Hollywood flicks and European art house fare. Graphic violence is around every corner, escalating to the point where each new scene will make you flinch in anticipation of the brutal demise of yet another character. Definitely not for the faint of heart, the film indulges in guilty pleasure thrills and explores the dark recesses of our most violent fantasies.

One scene, in particular, which takes place in an elevator, vividly contrasts the tenderness of a first kiss with a violent (and prolonged) death sequence. You'll never truly feel comfortable in an elevator ever again. Drive is filled with similar scenes -- jarring violent images that will shock you right out of your seat; and, judging from the gasps and applause from the audience last night, it happened on a few occasions.

As the driver, Gosling is a commanding screen presence -- he's absolutely terrifying and will erase all your previous memories of him as a gawky teen on Breaker High or as a romantic lead. His Driver is a man without a name or any past that we are aware of, making his actions all the more chilling since the audience is left without any idea of the true origin of his anger. Gosling proves he can play diverse characters and still bring his A-game to each performance.

Another noteworthy performance, albeit in a much smaller capacity, is Bryan Cranston as Gosling's pal, Shannon. The man can do no wrong, between this and the AMC series, Breaking Bad.  He's one of the few characters that actually inspires audience sympathy.

Despite the performances and the highly-stylized visual concept and direction, Drive stumbles a bit, preventing it from becoming a truly epic piece of revenge cinema. The uneven pacing at the beginning of the film makes it feel a little lopsided -- at first there's minimal dialogue and a whole lot of driving around. Perhaps Rehn's intention may have been to lull the audience into a state of calm before foisting the extreme violence on them. So, if that was his intent, it succeeded. If not, than the pacing could have used some re-tweaking.

Female characters are often relegated to the background in films like Drive -- although in this film they are practically put in a faraway corner. It's unfortunate that Mulligan's character, Irene, had little to do other than glance longingly at the driver -- even after she witnesses one of his violent episodes firsthand. There's no indication as to why Irene would even consider seeing the driver again and placing her son's life in danger just to be nearer to this violent man.

I didn't quite know what to make of Drive once the credits started rolling. I can appreciate where people are coming from when they tout it as one of the most stylish films to come out of Hollywood in years. Yet, there was something missing that I couldn't quite put my finger on. Visually stunning, yes. An homage to both Hollywood films past and European arthouse flicks, yes. Perhaps it was the pacing or the lack of any real character development -- or maybe my expectations were too high -- but I left wanting a little more substance to accompany the graphic violence. That being said, I realize I'm likely in the minority when it comes to Drive.

Regardless of my torn opinion, I'm glad I saw it. It will likely be discussed quite heavily among film fans for the next few months and who doesn't love when a film inspires great discussion? So, just sit back and buckle your seatbelts when you watch Drive. You'll certainly be taken for a ride.


Question: Drive will likely provoke a strong reaction in anyone who sees it. What did you love or dislike about the film?
Posted by Laura at 9:12 AM 10 comments: