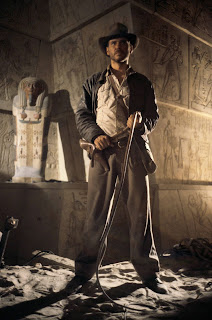 It's hard to believe Raiders of the Lost Ark is celebrating its 30 year anniversary this year. Nevermind the fact that I was still three years away from even being born -- the film is so classic and so timeless that it feels like it very easily could have been made today. With limited use of special effects, it's an action-adventure with a dash of the supernatural.

My parents first showed me this film when I was about six or seven years old. It was pretty much love at first sight -- I even watched the Young Indiana Jones television series just to get my daily Indy fix. I basically wanted to be Indiana Jones (I still do).

At an early age it instilled in me both a love for film and a passion for history (which I wound up majoring in while in university). I continue to watch this film annually with my younger sister -- I can't even venture a guess as to how many millions of times we've watched Raiders over and over again through the years. And each and every time I'm amazed how well it has stood the test of time.

Most film fans have lists and lists of artsy movies they credit as their "all time favourite film." I usually say mine is The Godfather when I'm asked, but if I'm being completely honest, it's probably actually Raiders of the Lost Ark -- or the third film in the original trilogy, Indiana Jones and the Last Crusade.

A few years back I had the opportunity to see Raiders at a screening at a really, really old theatre near Hamilton. It was such a treat to see it on the big screen. You know how people can quote movies like The Rocky Horror Picture Show word for word? Well, I can do that with Raiders.

A video has been circulating the Twitterverse of a recent Q&A session Harrison Ford and Steven Spielberg held in Los Angeles to celebrate the anniversary. Unfortunately, the videos can't be embedded, but you can listen to some of the audio from the YouTube video below.

I wish I could have been there!

Question: What is your favourite scene from all four of the Indiana Jones films?