"When it all goes quiet behind my eyes, I see everything that made me flying around in invisible pieces."


And so we are introduced to the six-year-old heroine at the heart of this fable from first-time director Behn Zeitlin.

With echoes of Terrence Malick's recent The Tree of Life, Zeitlin's film is part-poetry, part-family drama. It manages to feel rooted in stark realism while surrounded by fantasy and post-apocalyptic imagery. A big winner at both Cannes and the Sundance Film Festival earlier this year, Beasts of the Southern Wild marks one of the most promising directorial debuts in recent memory. Based on a play written by co-screenwriter Lucy Alibar and starring an entire cast of non-actors from Louisiana, Beasts is one of the great cinematic surprises of 2012.

The film is narrated by Hushuppy (Quvenzhane Wallis) a precocious six-year-old African-American living in the "Bathtub" -- a tiny piece of land downstream from a levee in New Orleans. Isolated from the rest of the world, she lives in a couple of ramshackle trailers with her gruff, alcoholic father, Wink (Dwight Henry). The residents of this forgotten piece of land spend their days laughing, drinking and getting by on what the land provides. It's a hard existence made easier by their shared sense of community. It's a world few of us could ever understand -- but you don't need to be able to relate to their existence to know that they make up a genuinely affectionate family unit.

Hushpuppy spends her days collecting food and spending time with wild animals, calmly picking up the smaller ones to hold against her ear so she can listen to their little heartbeats. She often carries on conversations with her absentee mother, calling for her in moments when she requires strength and guidance. Her desire to be remembered when she's gone inspires her to mark down her life's story with black chalk and pieces of cardboard. It's a hard life; a vivid reality told through the eyes of a little girl. 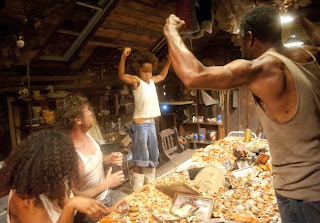 When a devastating hurricane rips through the Bathtub, forcing the "outside world" to intervene and force the residents to leave their homes, this tight-knit community bands together, refusing to budge. Beasts isn't so much about who is right or wrong. Nor is it about passing judgement on those who desire to stay behind and continue to live in the Bathtub. It's about the experience; a brief glimpse at the day-to-day life of a child and the rest of her community. Little else is known about the supporting characters, but this is Hushpuppy's story and we observe everything through her point of view.

Newcomer Quvenzhane Wallis is absolutely mesmerizing. Tiny and dainty, she's a force to be reckoned with and you don't doubt that she could take care of herself should she ever find herself alone in the wilderness. She even stands up to her fathers verbal threats, angrily telling him: "When you die I'll go to your grave and eat birthday cake by myself." It's one of the boldest and most memorable performances of the year. It would be impossible to imagine anyone else in the role. Wallis plays Hushpuppy with such a natural grace, it's a marvel that she's not a trained child actor. She tackles grown-up conversations and situations with a manner that is wise beyond her years. She's reason enough to seek out the film.


There will be naysayers who doubt its sincerity or question the directorial intent. Some may find it too precocious for their liking. But Beasts of the Southern Wild is a beautiful, moving slice-of-life narrative told through the eyes of a child.