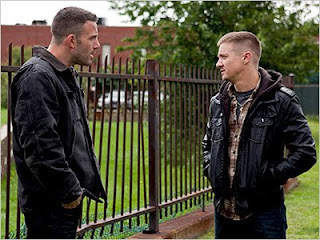 There's been a lot of hype swirling around Ben Affleck's sophomore directorial effort, The Town. It premiered at the Toronto International Film Festival last week and has been earning rave reviews across the board in critic's circles ever since the trailer debuted a couple of months ago. As a result, I went into the film expecting a fresh, original take on the tired genre of bank heist thrillers. Perhaps my expectations were set too high, as I wound up leaving the theatre wondering what all the fuss was about.

Based on Chuck Hogan's novel, Prince of Thieves, the film follows Doug MacRay (Ben Affleck) and his group of highly skilled bank robbers terrorizing Charlestown, a blue-collar area of Boston that claims to be the world's capital for carjackings, bank robberies and kidnappings. Donning creepy Halloween masks (different ones for each elaborate robbery), Doug's group leave behind no indication as to their identities, leaving law enforcement, led by FBI Special Agent Adam Frawley (Jon Hamm), baffled and frustrated. When Doug and his right-hand man James "Jem" Coughlin (Jeremy Renner) make the rash decision of taking bank teller Claire Keesey (Rebecca Hall) hostage to use as leverage, they inadvertently set off a chain of events that begins with Doug falling head over heels for Claire and culminating in a violent confrontation with law enforcement at Fenway Park.

In terms of visuals and technique, Affleck definitely excels in the director's chair. Like his 2007 debut Gone Baby Gone, The Town has a raw and grainy quality. It's almost as though Affleck is paying homage to Clint Eastwood's work in the directors chair. Affleck portrays his beloved Boston as an overcast, violent and ruthless place, where death can come at any moment, to both criminal or innocent bystander alike. He uses both tight close-ups and jarring action sequences, including an excellent car chase where Doug, Jem and the gang are wearing their now infamous nun outfits and toting machine guns. 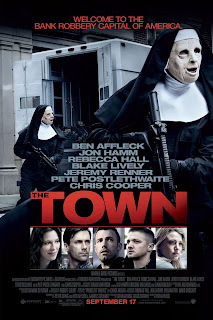 For his second feature film, Affleck made the dubious choice of casting himself in the starring role (when I first saw the trailer for the film during the summer, I remember thinking "Was your brother too busy to be in it?"). Affleck lacks the talent, screen presence and charisma of his younger brother, Casey. With his thick Bostonian accent, Affleck's portrayal of Doug is bland and, as a result, it's hard to care about the fate of his character. He doesn't give any indication as to why his character, Doug, is considered the brains of the operation; nor does it give us a real reason to root for him, especially since he continues to cruelly deceive Claire, the woman he supposedly loves. In fact, it feels like Affleck is simply recycling his role as Matt Damon's asshole friend in Good Will Hunting.

The supporting cast all suffer from severely underwritten roles. Each character feels like the stock characters that always figure prominently in action films of this type. Chris Cooper and Pete Postlethwaite (two really great actors) do what they can with what little is given to them as Doug's imprisoned father and the Irish gangster, Fergie Colm, respectively. Jon Hamm is awkward and miscast as FBI Agent Adam Frawley and his character is so wooden and appears to be cut from the typical movie mould of "arrogant, persistent cop". You don't care whether he catches Doug or not, nor do you understand why Frawley seems to be taking all these bank robberies so personally.

I was disappointed (but, sadly, not surprised) by the lack of a solid female role in the film. There are two women in the movie: Claire the bank teller and Krista, Jem's younger sister and Doug's original love interest. While Rebecca Hall and Blake Lively give decent performances with their roles, there is no real depth or strength in their characters. Claire is sweet and virtuous and falls for Doug as quickly as he falls for her. Unbeknownst to Claire, Doug is one of her kidnappers and he continues to unfairly keep her in the dark as to his real identity. She comes across as nothing more than pawn in the big, elaborate game being played by the boys. Krista, on the other hand, has about 10 minutes of screen time and, within that short time frame, she's either high on drugs, ignoring her baby daughter or begging Doug to run away with her.

The only real standout in the cast is Jeremy Renner. He's superb as the hot-headed, trigger-happy punk, Jem, who won't hesitate to kill anyone who stands in his way. With his intense glare and violent disposition, Renner keeps the audience on edge because you never know what ill-conceived idea he'll come up with next. He's essentially a tightly-wound ball of violence and anger. Although, like the other characters, little is known about Jem outside of the main plot, I kept thinking how much more interesting the film would have been had he been the central character. After his Oscar-nominated performance last year in The Hurt Locker, Renner's role in The Town only proves he was no one hit wonder.

When I left the theatre, the only three things I really loved about the film was the Fenway Park shootout, those scary nun masks and Jeremy Renner. Those three reasons alone are worth the price of admission.

Affleck likely has a long future in directing and he's more than capable of telling a good story. Here's hoping his next effort involves a plot with actual characters. Final verdict on The Town? An entertaining way to spend two hours but don't fall for all the hype.