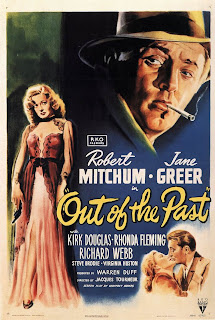 I'm continuing my ongoing Film Noir series for Next Projection. You can check out my post HERE. The third film on my list is Out of the Past (1947).

Like its sleepy-eyed antihero, Out of the Past is disorderly and complex – a thrillingly chaotic example of a multiple-narrative film noir.

Former private investigator Jeff Bailey (Robert Mitchum) is leading a quiet life in a small town in rural California where he owns a gas station. However, Jeff harbours a secret – one that is gradually revealed when his past reaches out to tap him on the shoulder one day. Back in another life in New York, he was known as Jeff Markham, hired by Whit Sterling (Kirk Douglas), a gangster willing to pay whatever is necessary to get his double-crossing girlfriend back. Kathie (Jane Greer), the girlfriend in question, left Whit’s body riddled with four bullets before taking off with his $40,000. Whit wants her back, but not for revenge. As he tells Jeff: “I just want her back. When you see her you’ll understand better.” The beautiful, doe-eyed Kathie is a maneater – shooting and conniving her way out of tough situations. The ultimate femme fatale, she would appear to have both Jeff and Whit wrapped around her finger.

Jeff’s story is told in a flashback narrative as he reveals his past to his new girlfriend Ann (Virginia Huston) on a long trip to Lake Tahoe. He tells Ann everything: How he tracked Kathie down for Whit, followed the trail to Mexico and instantly fell in love with her. Jeff goes even further; telling Ann he lied to Whit about finding Kathie so the two could run away together.  When Jeff and Kathie are spotted in San Francisco by Jeff’s former partner Jack Fisher (Steve Brodie) Kathie shoots him dead – leaving Jeff with the corpse and Kathie’s bank book showing that she had, indeed, stolen the $40,000 from Whit.

All of this takes place in the opening 40 minutes. The rest of the film is set in the present and includes two other storylines which all culminate in a violent finale. Screenwriter Daniel Mainwaring (the blacklisted novelist writing under the pseudonym “Geoffrey Homes”) wrote the script to his own 1946 novel, Build My Gallows High. The pulpy dialogue is rife with quotable one-liners (“If anyone’s gonna die, baby, I’m gonna die last”). Despite its melodrama and convoluted plot, Out of the Past is still thrillingly paced and pays close attention to the rising tension between Jeff, Whit and Kathie.

Half of the action takes place in lush, outdoor locations instead of stuffy soundstage sets, lending the film an atmosphere of authenticity rarely felt in the noir genre. Director Jacques Tourneur and cinematographer Nicholas Musuraca used rural locations, untouched by human corruption, to visually contrast the two lives of Jeff Bailey. The scenic landscape is as calm and beautiful as Jeff’s life is chaotic and violent.

As Jeff Bailey, Mitchum makes for an intriguing noir antihero. Constantly surrounded by a bright white ring of cigarette smoke and easily seduced by Kathie (does this make him a hopeless romantic or a deluded chump?) Jeff ultimately comes to terms with his fate – resigned to the fact that the majority of his choices in life have been poor. Mitchum’s slow, deliberate speech pattern and heavy-lidded eyes give Jeff the world-weary appearance of a man who has seen it all – the eternal cynic.

Out of the Past is essential viewing for any cineaste. Like Murder, My Sweet (1944) before it, the film is a measuring stick with which to gauge the success of every noir before and after its release.