Movie Review: Let the Right One In 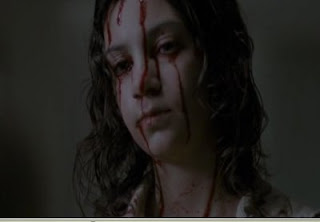 Let the Right One In (Sweden, 2008)
Directed By: Tomas Alfredson
Starring: Kare Hedebrant and Lina Leandersson

I've been a little behind on my entries, but not my movie-watching. Last weekend, I finally got around to seeing Let the Right One In; that Swedish vampire film that everyone was talking about two years ago.

What I didn't realize was that, more than anything else, Let the Right One In is a coming-of-age story. The fact that young Oskar's new friend, Eli, is a nocturnal bloodsucker is beside the point.

Twelve-year-old Oskar (Kare Hedebrant) is shy, awkward and mercilessly bullied at school. At night, he spends time by himself at the playground outside his apartment building. There he meets Eli (Lina Leandersson), the girl who has just moved into the apartment next door with a man she claims is her father. When asked what her age is, Eli replies, "twelve-ish." Despite the fact that it's the dead of winter, Eli wears only short-sleeved shirts outside, has cold hands, pale skin and appears older and wiser beyond her years. Oskar is immediately drawn to her and the two develop their friendship in the little playground at night, which is the only time Eli can come out and play.

Let the Right One In is a slow-burning film. Its opening shot is of falling snow, without any soundtrack. Everyone speaks in hushed tones and Oskar and Eli must overcome many obstacles before becoming genuine friends. It's more about the coming-of-age of two marginalized children than horror film (although there are unsettling scenes of blood and gore). The more you get to know Oskar and Eli, the more you feel for their sad situations: his because of the constant bullying he faces, hers because of her inability to connect to humans and violent desire for blood. Despite the supernatural situation, you want their friendship to endure. Somehow. 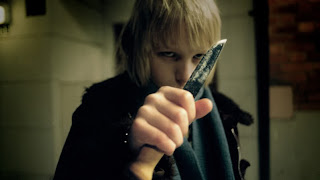 It's an intelligent film, made for audiences who love  character development and emotional connection mixed in with their horror. It's completely unique and unlike any vampire film you've seen before (it even twists around some vampire folklore to make it seem fresh and original). The fact that it effectively manages to combine gothic horror with tragic realism, is no easy accomplishment. I was surprised how affecting, tragic and emotionally charged a vampire film could be when put in the right hands.

One of the things I can't get over is how beautiful the film looks. Visually, it's better than the large majority of what you'd see in the cinema. The colours are darkened, in keeping with the atmospheric mood, and it makes Stockholm look like a beautiful winter wonderland. The darkened colours only serve to make the blood stand out even more, whether it's splashed on the snowy sidewalk or a dirty basement floor.

I'm not usually the biggest fan of child actors. They tend to over-emote and, because of their age, don't necessarily pick up on the subtleties of the development of their characters. Hedebrant and Leandersson go above and beyond what you'd expect from a child actor. There were times I forgot I was watching two pre-teens instead of two full-fledged adults. Both Hedebrant and Leandersson convey their loneliness and world-wearniess with their sad eyes. Their chemistry onscreen is also what makes their performances work so well. You can see their yearning for connection to one another. And, despite their obvious differences in the lives they lead, they are both looking for the same things.

Love story, horror film and social commentary wrapped in one, Let the Right One In will be one of the most powerful, beautiful coming-of-age tales you are ever likely to see. It will stay with you long after the film has finished. I now plan on reading John Ajvide Lindqvist's novel on which the film is based.