Taking the Fun Out of Robin Hood 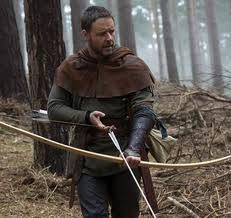 I finally got around to seeing Ridley Scott's Robin Hood last month. Despite the critical lashing it got from critics and audiences alike, I still wanted to see the film and judge for myself. Before the film's release, I was really excited by the idea of another take on Robin Hood. Since film adaptations of Robin of Loxley have always been light-hearted or straight-out comedies, I thought a more realistic take was long overdue. I love the mythology behind Robin Hood and whether he was real or not has had little impact on his enduring popularity as an English folk hero.

I suppose it was inevitable that it would fail with audiences. The script was plagued from the start. I remember reading that, initially, the Hollywood bigwigs were in talks of taking a more unique angle on the medieval tale, by focusing on the Sheriff of Nottingham, Robin Hood's greatest foe, instead. Russell Crowe was attached to play the Sheriff and, as of the article's publication date, no Robin had been announced as of yet, however, the hero's role would have been reduced significantly in favour of his arch nemesis. I thought this sounded like a really cool idea; I was curious to see if they'd make the Sheriff an out and out villain or a more sympathetic figure. The story of how Nottingham became Robin Hood can be found here. Supposedly, the screenwriters for Nottingham were (understandably) upset that their script was thrown to the wind. Then, Scott's team supposedly lied and told actors vying for the role of Nottingham that the role would be bigger than it actually was (which allegedly didn't impress Matthew Macfadyen, the actor who wound up taking over the role from Crowe).

When Ridley Scott jumped onboard to direct, Crowe agreed to play Robin instead of Nottingham. This is where I think the problems began. They had to re-write the entire script and, as a result, it became a big, jumbled mess with far too many separate subplots and not enough time spent on the stories we wanted to see. On paper, the idea of a film about the origins of Robin Hood seemed like an easy sell to audiences. You take a beloved folk hero and give his tale a new spin by giving him a prequel. And, since very little is known about the actual Robin Hood (if he was indeed real), screenwriters were free to do with his character as they pleased without upsetting purists.

Scott's Robin Hood is bloated, with too many characters and too many stories to tell. Considering this is the story of one of the most exciting of folk heroes, no one seems to be having any fun. I love Russell Crowe. I think he's a wonderful actor who has been robbed of nominations and awards on more than one occasion. That being said, I couldn't help but feel disappointed with how he played Robin Hood. He was far too serious and didn't seem to have an ounce of fun or charm in him. It was, essentially, like watching Medieval Maximus. What happened to Robin Hood and his ever-so-Merry Men? You can still make a gritty, realistic and exciting historical epic while having a bit of fun at the same time. But this Robin Hood strives so hard to be everything that the other film versions are not that it loses itself along the way.

One of the biggest flaws in this revisionist take on Robin Hood is its decision to give our hero a brand new nemesis. His name is Godfrey (played by Mark Strong) and he's very bald and very angry. Why is he angry? Well, there's a variety of reasons, mainly that he wants to be king and he doesn't like Robin all that much. Godfrey is not interesting. He tries to be, but he's not. He's not frightening, he's not diabolically evil and he's not witty. It's unfortunate it took the entire film's running time before he was killed off.

I think introducing Godfrey was a major error on the part of the screenwriters. In introducing yet another  character to the already bloated cast only serves to take away from what I presume most audiences came to see in the first place: Robin of Loxley vs. the Sheriff of Nottingham. Where is this Sheriff? Well, if you blink you may miss him. He's the grubby grump with about five minutes of screen time. The scripts went from having Nottingham as the main character to barely giving him a moment to string more than two sentences together. Everyone loves a good villain and the Sheriff is a great villain. When you talk about Robin Hood, be it another film version or the historical mythology behind him, you always have to mention the Sheriff. However, in Robin Hood he's nothing more than a footnote. Granted, it's likely this will be made into a franchise and Nottingham will get more screen time in future films, however, it just left me thinking, what's the point? Why diminish the role of this character? Why not take advantage of it and show the early stages of his rivalry with Robin? I can't even judge whether or not Matthew Macfadyen gave a good performance as Nottingham or not because you barely have time to register his character's existence. 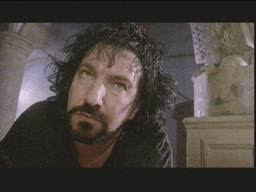 I guess I just prefer Kevin Costner's Robin Hood: Prince of Thieves. That's right. That's my opinion and I'm sticking to it. Prince of Thieves knew how to take the myth of Robin Hood and make it pure entertainment. Despite Costner's limited acting abilities, American accent and 1990s hair, I thought he made a great and passionate Robin. He's charming and has great chemistry with his costars. He, and the movie itself, never took itself seriously. It didn't pretend to be something it wasn't, unlike Scott's Robin Hood. Mary Elizabeth Mastrantonio was a lovely Maid Marion in Prince of Thieves. She was feisty on the homefront without having to charge into battle to prove it (I cringed when Cate Blanchett took up the cause in Robin Hood, in full armour, no less!). Robin's Merry Men were all amusing in Prince of Thieves, especially the ever-shitty and craptastic Christian Slater. If his "brother-from-another-mother" speech as Robin's step-sib Will Scarlett doesn't make you smile, I don't know what will ("I was the son of the woman who replaced your dead mother for a time! You ruined my life!"). And, of course, the main reason most people aren't ashamed to admit their love for Prince of Thieves is because of the incomparable Alan Rickman as Sheriff George of Nottingham (pictured right). He's so outrageously over-the-top and clearly having the time of his life, that you can't help but love him.

Ridley Scott and his bevy of script writers did a rush job. They could have done so much with their revisionist telling of an old tale. Instead, they went the dull and bland route. No new dimension was added to any of the characters. In fact, I left the theatre annoyed with the portrayal of some of my favourites, especially Marion. The only two standouts were Danny Huston as King Richard (although his role was too small, but that's no surprise in this version) and newcomer Oscar Isaac as evil King John. I thought those two were wonderful and could have done some great things with their characters if given more time. In the end, you leaving the theatre thinking, what was the point? Robin Hood is supposed to be fun and the plot should be in constant motion. No one wants an emo Robin who spends the first half of the film discovering his uninteresting family history. It's not what we as an audience signed up for.

Should there be a sequel, here's hoping it's a revisionist take on an aspect of Robin's life we all want to see: his rivalry with the Sheriff of Nottingham. Robin Hood wasn't all terrible. It was visually appealing and had some solid battle scenes. I just know there's a great film in there somewhere, waiting to come out. Here's hoping the sequel corrects all of its flaws. 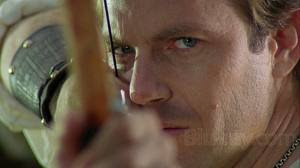 In the meantime, I'd recommend swallowing your Kevin Costner hatred (for those of you who have it) and revisit Robin Hood: Prince of Thieves instead (pictured above).