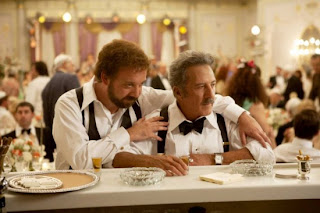 I went to a Toronto International Film Festival gala last night which was a nice surprise considering I hadn't expected to attend TIFF at all this year (too much school overload). Yet, lo and behold, free tickets to a much-buzzed about Canadian indie landed in my lap.

Based on the novel by Canadian author Mordecai Richler, Barney's Version follows the life of Barney Panofsky, an alcoholic, cigar-chomping womanizer who has three ex-wives, a string of broken friendships and an eccentric elderly father. Like Richler's novel, the plot travels through both the highs and lows (and there are a lot of lows) of Barney's life between the ages of 28 to 65. The only things that appear to truly matter to Barney are the Montreal Canadiens hockey team, his brutally frank father and a woman named Miriam.

I didn't know what to expect going into the movie. As it turns out, the trailer for the film is quite misleading as it portrays Barney's Version as an outright comedy about a middle-aged man, the women he both loves and leaves and his kooky father. There's no real indication of the bleak vision and tone that permeates the film. It's actually an honest look at a flawed human being making very human mistakes, often with tragic and fatal consequences. Barney is actually a miserable, often self-loathing man full of residual anger and depression. It's not all a barrel of laughs. Barney struggles in his relationships with women and is even accused of the murder of a friend.

Barney's Version is an unflinching portrayal of a man in a perpetual state of decline. Barney is a man who never seemed to actually be "on top" at any point in his life. When the audience first meets him, he's a mixture of alcohol-fueled resentment and wicked one-liners; a sad old man with one too many tragedies in his life (many of which were self-inflicted).

Right from the opening sequence the viewer is at the mercy of Barney's fragmented memory. The film opens with Barney as a lonely 65-year-old trying to reconnect with the love of his life. As disjointed memories of his younger days both spent traveling Europe and living his later life in Montreal invade his thoughts, the viewer is left wondering how exactly Barney became Barney. His self-destructive behaviour makes for a compelling character study. Barney's Version truly is a grown up film tackling adult issues.

As Barney Panofsky, Paul Giamatti is an early front-runner in the Best Actor category, for those keeping tabs on this years Oscar race. If put in the hands of a lesser actor, Barney could have been a loathsome curmudgeon, undeserving of any sympathy from the viewer. It's hard to imagine loving a man with such an unhealthy and selfish lifestyle; however, Giamatti makes him a likeable anti-hero who is trying to get by on a day-to-day basis while systematically destroying those around him by his mistakes.

Giamatti benefits from a really strong supporting cast, specifically from his main leading lady, British actress Rosamund Pike. As Miriam, Barney's third wife and the love of his life, Pike is nothing short of radiant. Pike makes Miriam more than just a beautiful face; she's the strong-willed, faithful and gentle centre of Barney's erratic life. Without her, Barney would have faltered long ago. Despite their differences in personality, Miriam and Barney work so well as a couple struggling with marriage because Giamatti and Pike work so well alongside one another.

The rest of the supporting cast is just as stellar. Minnie Driver, as the Second Mrs. Panofsky, is hilariously shallow and crass. Canadian actors Scott Speedman and Bruce Greenwood are both charming in their roles as Barney's best friend, Boogie, and Blair, Barney's rival for Miriam's affections, respectively. There is even a memorable cameo from homegrown talent Paul Gross, who appears as an actor playing a Mountie in Barney's television series, O'Malley of the North, in a nod to his days on Due South. Dustin Hoffman nearly steals the film out from under everyone's feet as Barney's raucous, inappropriate father, Izzy, a retired police officer from the Montreal Police Department who spends his days drinking, sleeping with prostitutes and telling people about his exploits and misadventures as a cop.

Despite the strong supporting characters, the attention always goes back to Barney. How much do we really know about this bundle of violent emotions?

In the end, the viewer is left overwhelmed by the fates for many of the people in Barney's life. How much of it is the actual truth and how much of it is simply Barney's version of the truth? And, does it matter?

As Mordecai Richler himself said about his protagonist, Barney Panofsky: "He's not automatically sympathetic, so it's up to your own cunning or craft as a writer to involve the reader with him because the novel wouldn't work otherwise."

Considering Richler worked on an early version of the script before his untimely death in 2001, I'd say the success he had with creating Barney in his novel translated just as well onto the silver screen.