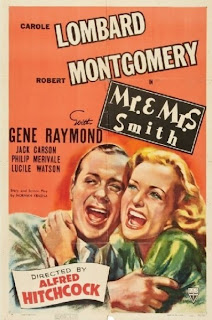 It's not often that you hear the words "Hitchcock" and "screwball comedy" being uttered in the same sentence. Yet, back in 1941, Alfred Hitchcock made a brief foray into comedic territory. Hitchcock always had a sense of humour and a knack for comedic timing; it's just that those moments of levity often occurred in his most suspenseful thrillers -- not full-out comedies.

In Mr. and Mrs. Smith, Hitchcock concocts a breezy comedy centred around a marriage between a hot-headed couple. After three years of marriage Ann and David Smith (Carole Lombard and Robert Montgomery) discover that, due to some outlandish legal error, their marriage was never validated. While Ann panics, wondering what her mother will think of the fact that she's technically been living in unwedded bliss with a man, David relishes the thought of his freedom. After a particularly aggressive fight and subsequent make-up session, Ann innocently asks: "If you had to do it all over again, would you marry me?" David's nonchalant response: "No." And so he must embark on a series of mishaps and misadventures to win back the affection of his wounded wife who has since taken up with his childhood friend, Jefferson (Gene Raymond).

Working from a script by Norman Krasna, Hitchcock hits the mark as often as he misses the target. Mr. and Mrs. Smith is not funny enough to distract audiences from the fact that we know exactly where this is headed. Although the whole idea of a happy ending, achieved only after multiple mix-ups, is a familiar trope of the screwball genre, the premise is stretched thin with a nearly two hour running time. Unlike Gregory La Cava's 1936 screwball masterpiece My Man Godfrey -- which provided sharp commentary on the class system during the Depression -- Mr. and Mrs. Smith has shockingly little to say about anything deeper than surface level, especially on the subject of marriage. It simply coasts on the charm of its female lead, yet even Lombard alone can't keep it afloat.

That being said, Lombard turns in yet another of her effortlessly hilarious performances. There's no denying her talent and ability to convey a woman on the verge of an emotional collapse, while still making us laugh. You believe, wholeheartedly, every word and gesture. To this day she remains ones of film's great comedienne's for her spot-on comedic timing.

Montgomery has his fair share of standout scenes (look for the moments where he stares down a cat at a restaurant or when, to get out of an awkward moment, he casually tries to induce a nosebleed to get out of the situation). As the egotistical David, it's a pleasure watching him struggle to understand what he did that was so wrong. As Ann drifts further and further away from him and ultimately starts taking up with an old friend of his, it's only then that he realizes how much he misses his wife.

In the end, Mr. and Mrs. Smith proves to be a fun diversion, albeit one that will make you laugh without being particularly memorable.

Some critics have shrugged off this effort as one of Hitchcock's biggest cinematic misfires, and while there is no arguing that it is one of his weakest efforts, Mr. and Mrs. Smith is by no means a misfire. It has some shining moments led by its two likeable leads -- but it's just not on par with other screwball greats of the era.

FINAL GRADE: B
Posted by Laura at 6:54 PM No comments: