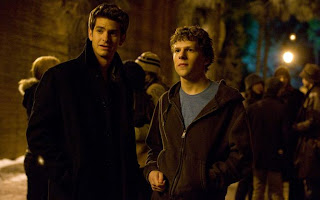 Yes, it has taken me this long to see The Social Network. For the record, I love David Fincher and the fact that he has Aaron Sorkin as his screenwriter makes the film a force to be reckoned with in both the directing and screenplay departments. That's a lethal combo of Hollywood talent. So, why did I only watch The Social Network for the first time last weekend? Because I had a complete lack of interest in watching a movie about the founder of Facebook. I initially thought it was too soon to have a movie about Mark Zuckerberg and the trailer looked dull as tombs.

Set in 2003-04, The Social Network follows the steady rise of Harvard student and computer programming genius, Mark Zuckerberg (Jesse Eisenberg), as he launches a social media revolution within the small confines of his dorm room. As he quickly became America's youngest billionaire, two simultaneous lawsuits against Zuckerberg arise from his former best friend, Eduardo Saverin (Andrew Garfield) and two former business partners and fellow Harvard students, the Winklevoss twins, Cameron and Tyler (both played by Armie Hammer). Both parties claimed Zuckerberg conned them out of money and stole their idea, respectively. Zuckerberg further rankles his former colleagues by befriending and partnering with the cocky co-inventor of Napster, Sean Parker (Justin Timberlake).

Fincher and Sorkin provide ample evidence as to why a movie about Zuckerberg at this specific time is important on many levels. With the world quickly becoming a place where people more often interact with one another using digital technology instead of personal interactions, The Social Network is a timely reminder that even with the advent of Facebook and Twitter obscuring our "confrontations," people still utilize their baser instincts through any means possible. Only now, we have a screen to hide behind. And the screen Zuckerberg hides behind is his genius and his debute of Facebook. When forced to come face-to-face with both of the lawsuits, Zuckerberg clams up and only his arrogant zingers are heard. He expresses boredom with the proceedings, giving off the impression that'd rather be alone in his dark room, improving Facebook. Here's a young man with so few friends that the only way he understands basic human interaction is through a computer screen. 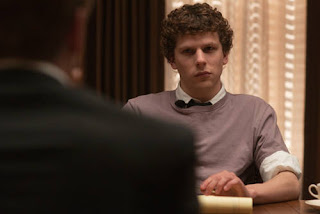 With his "Friend" count on a steady rise on his Facebook profile, Zuckerberg ultimately betrays the one and only true friend he actually had in real life -- Eduardo. Zuckerberg's indifference towards the Winklevoss twins and their claims makes him unlikeable, but his downright cruel treatment of Eduardo is what really sets the audience against him, especially considering it was Eduardo's $18,000 that helped Zuckerberg launch Facebook in the first place. His ultimate act of betrayal against someone like Eduardo, a true gentleman and loyal friend, is made all the more shocking by the fact that it actually happened.

As Zuckerberg, Eisenberg is appropriately arrogant, aggravating and hard to decipher. You never really know what is going on inside his head, although his rumpled attire and ever-present flip-flops suggest someone both pretentious and indifferent to his legal woes. Eisenberg delivers Sorkin's red-hot one liners with both lightning speed and a dark, dry sense of humour. He's smarter than you will ever be and he's not afraid to let you know it. While Eisenberg delivers a solid performance, I still found his portrayal of Zuckerberg to be dangerously close to every other role I've seen him play. I may be in the minority, but I wasn't wowed by Eisenberg in The Social Network. I still think he has a ways to go before he can break out of that smart ass geek man-child role.

It's the supporting cast that really keeps this film afloat. If not for Garfield as Eduardo or Hammer as the Winklevoss twins, the film would have sunk under the weight of extremely unlikeable, spoiled university students. These three characters are the only likeable people in the entire film -- and their decisions to sue Zuckerberg are more than understandable. Garfield, in particular, is excellent. Coming off his wonderful and underrated performance in Never Let Me Go (for which he should have received a Best Supporting Actor nomination), Garfield proves that he's no one-trick pony. As Eduardo, he delivers an understated, nuanced performance and he earns audience sympathy because of both his charm and his ability to effectively convey his bruised feelings after Zuckerberg's betrayal. Here's an actor that Hollywood should keep a close eye on.

Hammer pulls off the duel role of the Winklevoss twins so perfectly, that the majority of the audience (myself included) thought it was actually two people -- real life twin actors. Hammer's ability to create two very different personalities and fool the audience into thinking there are actually two actors on the screen in no easy task. As the supremely unlikeable and irritating Sean Parker, Timberlake proves he can more than hold his own in a big Hollywood film. While not the strongest link in the film, Timberlake has an undeniable screen presence that could turn into something really great one day.