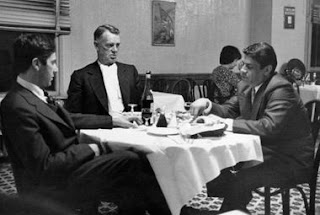 BASIC PLOT: Based on the novel by Mario Puzo, it follows the lives of the Corleone family. Set in 1950's New York, when patriarch Don Vito Corleone (Marlon Brando) is at his height of power in the Mafia underworld, the plot trails the passing of the torch between Don Vito and his second-oldset son, Michael (Al Pacino). Business remains all in the family.

FAVOURITE SCENE: The restaurant scene when Michael meets with rival Mob leader, Sollozzo, and the dirty cop, McCluskey. Michael's father, Don Vito, has been the target of an assassination attempt and Michael, who is Ivy League-educated and a decorated Second World War veteran, wants vengeance for the actions taken against his father. This is the first time Michael is involved in the "family business" and while he may seen soft-spoken and willing to co-operate with Sollozzo, there is barely concealed anger in his eyes. Will he kill the two men or won't he?

WHY? Francis Ford Coppola lensed countless memorable moments in his masterpiece, however, the restaurant scene leaves a lasting impression due to the fact that, once Michael commits the two murders, there is no turning back for him. It's the start of his journey that will eventually see him move up in the ranks into a leadership position himself.

The scene starts off with a glass of wine and a business discussion in Italian. There are no subtitles to translate the conversation, therefore, the audience is left to come to their own conclusions as to what is being said based on tone of voice, body language and overall expressiveness. The audience is in the same position as Officer McCluskey; left alone outside of the conversation, waiting to see how it will all pan out.

When Michael excuses himself to use the washroom you know that, in actuality, he's looking for the gun that was left for him behind a toilet bowl. The only sounds that can be heard are that of a passing train; reflecting the inner turmoil and brief hesitation we see in Michael as he discovers the gun.

Coppola's decision not to use a background score (until after the murders take place) adds to the building tension in the scene. You can clearly hear the conversation, as well as city sounds in the background. One can perceive that the lack of a musical score at this time reflects Michael's emotional state; he's calm and focused and nothing will distract him from what he's come to do. Only after he's brutally shot the two men at the table, does the score kick in, as though to reflect the release of Michael's tension.
The scene is beautifully executed (no pun intended) and Al Pacino instills Michael with fire and brimstone beneath a calm exterior. In that brief moment we see the man that Michael will become and we understand that, for his character, there is no turning back. His fate was cemented the moment he show Sollozzo and McCluskey as an act of revenge for his father's near-death experience.
Every subsequent Mafia film has tried, and failed, to capture that same amount of tension and realistic violence Coppola has in his film classic.
Posted by Laura at 11:19 AM No comments: