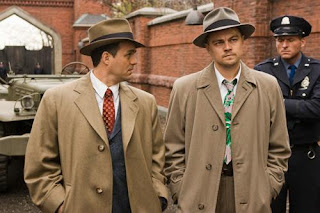 Back in 1992, Martin Scorsese remade the 1962 film noir classic Cape Fear. With Robert DeNiro and Nick Nolte in the leads, the film was nothing more than aesthetically pleasing camp. The actors were all over-the- top and many people would be hard pressed to even remember that it was a Scorsese remake and not some other director with a mediocre film resume.

Shutter Island plays out like Cape Fear, only much worse.

Based on a Dennis Lehane novel, Shutter Island is set in 1954, when film noir was at its peak at the multiplexes across America. It's clear that Scorsese's goal was to make a film noir-ish psychological thriller. Just don't expect Shutter Island to be that film.

U.S. Marshals Teddy Daniels (Leonardo DiCaprio) and Chuck Aule (Mark Ruffalo) are paired up together to solve the disappearance of Rachel Solando, an inmate at the Ashecliffe Hospital for the Criminally Insane. Naturally, it's situated on an island where the only way on or off is via ferry boat. There they meet Dr. Crawley (Ben Kingsley), a man who wants to issue solved while providing the least amount of help possible. There's also a subplot involving flashbacks of Daniels' days as a soldier in the Second World War (he was one of the liberators of the Dachau concentration camp) and his rocky marriage to his deceased wife, Dolores (Michelle Williams).

The priority of most noir films of the 1940's and 1950's was its emphasis on visuals and style. The tragic and bleak conclusions were often secondary to the overall atmosphere of the film.

Stylistically, Shutter Island succeeds. Everything is washed over in a variety of grey tones and shadows. However, the plot, script and performances leaves much to be desired.

Neo-noir films (especially those of the 1970's) acknowledge the conventions of classic film noir, from the melodrama to the psychologically expressive visuals to the protagonist as a criminal. These are all derived from the German Expressionist film movement of the 1920's.

This film plays off as the horrible lovechild of Das Cabinet Dr. Caligari (1919, the greatest German Expressionist film of all time), Fight Club (1999) and A Beautiful Mind (2001). Unlike Roman Polanski's 1974 masterpiece Chinatown or Scorsese's own Taxi Driver, Shutter Island is nothing but an absolute mess and a wasted opportunity.

DiCaprio is such a wildly inconsistent actor. When he's at the top of his game, he's golden (What's Eating Gilbert Grape, Catch Me If You Can), but when he's off his game, he's lousy (Titanic). DiCaprio, who has always struggles with accents, does so again here. His Boston accent fades in and out and alters so often to the point of distraction. Shutter Island is definitely his weakest outing in awhile. He and Scorsese need a break from one another.

Ruffalo, always a reliable actor, is probably the films strongest link. Despite an awful, sidekick role, he makes the best of what he's given. And he never once feels out of place in his 1950's fedora and trench coat.

Kingsley, Williams and the other secondary characters are all mediocre at best. Granted, the material they were given wasn't exactly award-winnin, but one could argue that any genuinely talented actor can rise above the material. That never happens here.

The plot is ludicrous. The outcome of the film is obvious about an hour into it's two hour and twenty minute running time. Just when you think the film couldn't possibly take another nonsensical turn, it does just that. This isn't a cool, mind-twist of a film. It's just outright awful.

It's hard to say anything more about the film as it would "spoil" the millions of twists and turns it takes. However, it's doubtful that many people will leave the theatre enthralled and enthusiastic about what they just witnessed.

It's clear that this twice delayed film had more woes than the studio could handle. By releasing it in February (where all movies go to die), the big bosses in Hollywood clearly didn't want anything more to do with it. Understandably so.