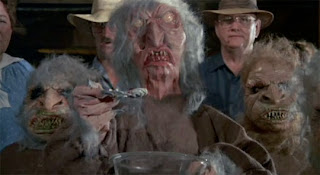 Last weekend, three friends and I decided to kick off the Halloween weekend with our very first viewing the "so bad it's good" Troll 2. We all found we had something to say about this ...classic.

There's something to be said for a truly awful film that has found a cult following to match that of The Rocky Horror Picture Show or, more recently, The Room. What is it that audiences find so appealing about Troll 2? The movie, as the documentary Best Worst Movie illustrates, has worn its awfulness as a badge of pride in the 20 years since its straight-to-VHS debut in 1990.

When a family arrives in the vacant town of Nilbog they are exposed to a band of vegetarian goblins who turn their victims into green veggie goop before consuming them for dinner. The brilliant minds behind this premise? Italian "director" Claudio Fragasso and his partner, Rosella Drudi.

If you are looking for a low (very low) budget horror movie with unintentional laughs, surreal plot "twists" and some of the worst acting this side of Tommy Wiseau, than look no further than Troll 2. It's enduring popularity continues mainly because it just makes you feel so damn good!
-Laura (Twitter: @laura_grande13)

Here's what Emily Sadler (Twitter: @emmysadler) had to say about Troll 2.
Before Laura told me about Troll 2, I had never heard of it. As she and I are often reminded, there are a lot of movies I've never heard of, so I just figured Troll 2 was just some horror classic that somehow flew under my radar. That thought lasted until about two minutes later, when I watched the YouTube clip of Arnold's "Oh my gawwwwd!" scene from the movie. Slightly grossed out by the slimy, green stuff and pretty amused by the fly on Arnold's forehead, I knew immediately that I needed to see this movie.

I must say, I'm not one to sit through a horrible movie just for the sake of appreciating the terrible-ness of it all. But there's something so wonderfully bad about Troll 2 that I can't quite explain.

And, here are some comments from Cara Waterfall (Twitter: @belledejournal).
The best thing about Troll 2 is its earnestness: without it, you're left with a cut-rate flick whose plotline has the cohesiveness of a bowl of Jell-O. But when you factor in an overzealous, autocratic director, a screenplay that sounds like it was fed into (and spat out of) Babelfish and lovely bad actors, from an Elvira-type sorceress to a freckled boy better suited for Chef Boyardee commercials than cinema, then you've got: the "best worst movie."

Here is our compiled list of Life Lessons We Learned From Troll 2:
1) Vegetarians are the devil.
2) Never eat green shit. Hungry? Stay away from that green-shit sandwich and green-frosted cake.
3) That awkward moment when you shut the car door when the person inside is still talking to you? That happens in movies too!
4) Looking to spice up your love life? Just add corn!
5) Sometimes, you can piss on hospitality. Literally.
6) To avoid hunger pains after one missed meal, tighten your belt exactly one notch.
7) Always keep a double decker bologna sandwich (on a hamburger bun) in your backpack. You never know when it might save the day!
8) People can actually have names like Gene Freak ...and you'll just have to come to terms with that as best you can.
9) The best way to comfort a terrified, scantily-clad woman alone in the forest is to tackle her to the ground.
10) Always trust the ghost of your grandfather -- especially if he's been to hell and back. Chances are, he'll have learned a few goblin-killing tricks down there.
11) If you put some food in a brown paper bag and throw it, it will actually fly through the air like a frisbee!
12) To avoid those intense family moments, make the situation better by breaking out into a rendition of "Row, Row, Row Your Boat."
13) Your older sister will always be a sexier dancer than you!