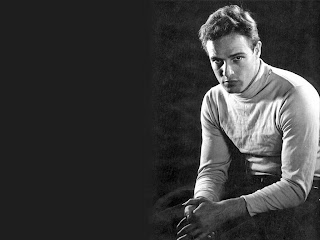 "To the end of his life, Marlon Brando insisted that he had done nothing special. In his view acting was a trade like plumbing or baking. The only difference was that he played characters instead of unclogging drains or kneading loaves of bread. This was not false modesty; he believed what he said. But what he believed was untrue."
~Stefan Kanfer (opening passage from Somebody: The Reckless Life and Remarkable Career of Marlon Brando)

Today would have marked Marlon Brando's 89th birthday. And, in my biased opinion, he was the greatest film actor. Ever. And that warrants a blog post, me thinks.

Unfortunately, for a large handful of people, Brando has been reduced to a mumbling, fumbling actor whose eventual reclusive lifestyle resulted in a variety of perceived eccentricities and ballooning weight gain. And, yes, while Brando wasn't your average film star, he deserves more credit than he is often given by newer generations just discovering his work for the first time.

As I wrote last year: after reading Stefan Kanfer's biography in 2008, I realized that Brando was so much more interesting than even his craziest character incarnations. He used the Method when performing, well before it was mainstream. He was an activist at heart, battling racial segregation in America in the 1960s and providing a public voice for struggling First Nations actors. He remained loyal to family and friends who stuck by him through thick and thin, including maintaining long-term friendships with neighbours Jack Nicholson and Michael Jackson. He had plenty of Hollywood rivals, including an ongoing feud with Frank Sinatra. He had volatile relationships with women, marrying three times and fathering (at least) 10 children. He never abused drugs or alcohol, yet often fell prey to his weakness for food.

Last week, I finally managed to track down a copy of his out-of-print autobiography, Songs My Mother Taught Me, and I look forward to reading about his life from his own perspective.

(FYI, for all you Toronto readers: Check out The Hollywood Canteen near Honest Ed's for rare, hard-to-track-down film collectibles. It's where I was finally able to locate a copy of his autobiography).

While Brando may not have the enduring iconic status of Marilyn Monroe (a former lover) or the near-rabid fanbase of James Dean, the mark he left on cinema has its own special lasting effect. While Monroe and Dean were both talented, beautiful performers, neither could inhibit a role quite so effortlessly as Brando.

Without Brando there would be no Robert DeNiro (well, 70s-era Robert DeNiro anyway) or Daniel Day-Lewis. He continues to inspire and influence -- often imitated but never duplicated. And that, in part, is the sign of a true talent.
Posted by Laura at 7:17 AM No comments: