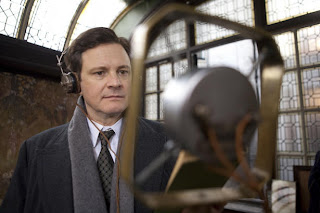 It has, arguably, been a slow year for film. Although there have been a few great ones along the way, I've found it tough to come up with a top ten list for the end of the year. Considering the Oscars will, yet again, announce 10 Best Picture nominees, a handful of those films will get in simply to fill out that list.

The King's Speech has had buzz surrounding it since its debut at the Toronto International Film Festival in September. The premise is simple enough and, on paper, doesn't sound like it would make for epic historical cinema.

Set in the late-1930s, with the ominous (and, at the time, largely misunderstood) rise of Nazism in the background, Prince Albert (Colin Firth) struggles to overcome a speech impediment he's had since childhood. His debilitating stammer has led to countless public embarrassments; however, a long line of "doctors" have been unable to find a cure. After the death of his father, George V (Michael Gambon) and the surprise abdication by his older brother, Edward VIII (Guy Pearce), Albert becomes King George VI and is thrust into the public domain at a time when Great Britain is on the brink of war and in need of leadership now more than ever. With the help of his wife, Elizabeth (Helena Bonham Carter), George finds a speech therapist from Australia named Lionel Logue (Geoffrey Rush), a man with a reputation for unorthodox treatment methods.

Who knew a film focused on the speech therapy of a now-deceased king could make for such compelling drama? Even I had my doubts, going into the film. I worried the film was all hype and wouldn't live up to all of its praise. I'm glad I was wrong.

With the advent of mass communication in the form of the radio, George is expected to rise to the challenge and lead his people, as a united force, against Nazism. This would be no easy task for anyone, experienced or not, let alone someone with a deathly fear of public speaking due to a seemingly incurable speech impediment. George's desire to no longer speak with a pronounced stammer becomes less about helping himself and more about having the clarity and strength to inspire his people into action. He's no longer simply trying to find his own voice, but that of his entire kingdom. When his daughter, Elizabeth, asks him what Hitler is saying in a rousing speech the Royal Family watches on a newsreel, George replies wistfully: "I don't know. But, he seems to be saying it rather well." 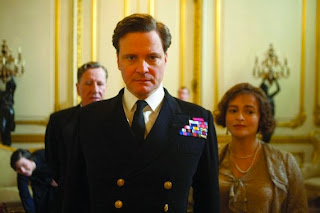 Firth is on a hot streak. With The King's Speech coming so soon after his heartbreaking and underrated performance in A Single Man (2009), he is one of the best actors working in the industry today. As George VI, his performance is subtly beautiful. A lesser actor would have chewed the scenery and over-embellished every emotion, yet Firth's polished and nuanced performance adds layers of emotion and character development with professional restraint. The man understands his character and how to properly portray a man on the brink. It is, without a doubt, the finest performance by a male actor this year. Firth makes George VI heroic and brave without simply playing off his disability. Firth works hard to earn the audience's sympathy to the point where, in the climactic speech at the conclusion of the film, you are on the edge of your seat as though watching an action thriller. The scene is so exciting because Firth made it so.

As Lionel, Rush is at his quirky best. He's such a fine actor that he does more than his share in a supporting performance. At times both hilarious and fiercely proud of his work in his field, Lionel provides friendship and emotional support to a king that experienced very little of either growing up. Like his character, Rush provides support for Firth as both Firth's acting equal and for his ability to allow (and help) Firth to shine. Rush's work in The King's Speech is the definition of a supporting performance.

The rest of the cast is just as stellar, with Bonham Carter, Pearce and Gambon all strong in their supporting roles. If nothing else, the film is a genuine performance piece with talent at every turn.

Director Tom Hooper (who last year helmed the wonderful and sadly underrated film, The Damned United) has done a wonderful job of making what could have been a dry concept and turning it into something fascinating. I especially admired the unique framing techniques. The camera had the tendency to be off centre, leaving ample head room above the actors as well as on one side. It gave the film an artistic, indie feel. Most costume dramas tend to focus on beautiful pastoral images to make up for the stuffy, routine indoor shots; however, Hooper and his camera crew gave it a fresh spin.

The King's Speech just might end up being the film to beat during the awards season.