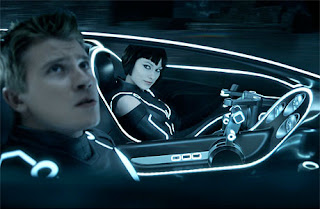 I had no idea what this film was about, going into it. I was coerced into seeing it. I wanted to see The Fighter, my friends voted for Tron: Legacy. It all came down to a vote and I lost.

The film was, according to my friends, a sequel to a trippy 1982 sci-fi adventure with a 20-something Jeff Bridges. I'd never heard of it. To me, the trailer for the sequel looked like a blue-hued version of Speed Racer. And, really, who actually liked (or even saw) Speed Racer?

However, sometimes going into a film you have absolutely zero desire to see can work to your advantage. I had no preconceived notions, no expectations. I couldn't have cared less whether Tron: Legacy was a great action sequel or a complete dud. Now that I've seen the film, I realize how hard it is to review. As my sister (and countless others) pointed out, critics should not attempt to review action films. But, I'll give it a go.

The premise (and I will try my best to get all the lingo right): Sam (Garrett Hedlund) is the son of Kevin Flynn (Jeff Bridges), a "virtual world designer" who went missing more than 20 years ago. During his renewed search for his father, Sam is accidentally pulled into the same computer world as his father. Sam encounters violent Programs, a sexy sidekick named Quorra (Olivia Wilde) and an evil (and younger) digital alter-ego creation of his father named Clu. Sam, his father and Quorra race across a virtual universe (the digital world is referred to as The Grid) in order to return to the real world after defeating Clu (a creepy CGI version of Bridges).

The film, like The Grid itself, is in a state of near-constant gamer warfare. As Clu schemes to steal Flynn's memory disc (something everyone in The Grid has strapped to their backs), he stages gladiator-esque duels between Programs. Clu's intention is to abandon The Grid and travel into the real world to kick human ass, with all of Flynn's genius creations (physically) in hand. Somewhere in the last 20 years, Flynn had lost his power to Clu, who lords over The Grid like an emperor while Flynn has retreated to a temple-like abode away from all the havoc.

Everything is coloured in cold (and eerie) shades of blue, black, white and the occasional orange. The visuals and animation are all excellent. Having computer programs fight one another, with the defeated ones crumbling out of existence, makes for entertaining action sequences. I can't recall having ever seen a film where computer programs faced off against one another by throwing memory discs at each other like Frisbees. My only major qualm, in terms of animation, was the horrible CGI face on Clu. Seeing a younger version of Bridges' face on another actor's body is unnerving and ridiculously phoney looking (and, considering the whole film is essentially CGI and special effects, it should have looked more realistic). 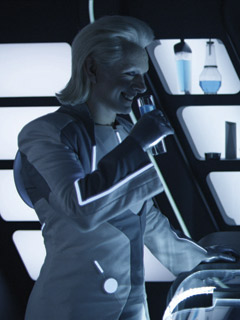 The film is, if nothing else, pure adrenaline. Granted, the premise is a little lacking (having a son go back to rescue his father has a very "been there-done that" quality to it) but many aspects of it still work as an action-packed sci-fi adventure. The cast plays a role in helping Tron: Legacy rise above other mundane films of the genre. Bridges is a great actor and, while this is far from his best work (hearing him say lines like, "You're messing with my Zen thing, man!" made me laugh for the wrong reasons), he seemed to be having a great time and that comes across to the audience. Hedlund and Wilde, on the other hand, are charming as Sam and Quorra, but there's not much else to say beyond that fact.

Two casting choices, in particular, surprised me. James Frain (as Clu's henchman, Jarvis) and Michael Sheen (as the all-knowing Castor) are two excellent English actors who have done much better work in much better films. Seeing Frain as a bald, silver-lipped computer program and Sheen (pictured above) as an all-white merry prankster who looks (and acts) like the love-child of David Bowie and Alex DeLarge (Malcolm McDowell) from A Clockwork Orange, was bizarre, to say the least. However, Sheen comes out as the stronger of the two, stealing all of his scenes from the other actors and providing much-needed comic relief. Even in a silly sci-fi movie, he's wonderful.

In the end, my favourite aspect of the film turned out to be the soundtrack, provided entirely by the French electronic duo, Daft Punk. I'm not, by any means, familiar with their work; however, in the context of this film, their musical creations worked perfectly. It added both an ominous and rave-like quality to action sequences that were already pretty trippy to begin with.

Overall, Tron:Legacy was a lot more enjoyable than I expected it to be. Granted, I know nothing about the original film, so I can't say whether or not it was a faithful sequel. It's one of those films where you leave the theatre thinking, "that was cool" before putting it out of your mind almost instantly. A part of me had fun while the other half still wished I'd seen The Fighter instead.