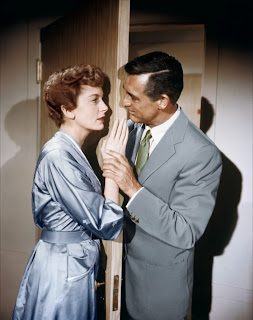 "Winter must be cold for those with no warm memories ...we've already missed the spring."
~Terry McKay (Deborah Kerr)~

I'm not usually one to fall for films that come under the genre of romance. Of course, I have my exceptions; it's just that I find the large majority of the ones I've seen to be too sappy and saccharin for my taste. I like a dose of sour with my sweet. If I'm going to watch a film about romance, I prefer mine with a dose of reality.

An Affair To Remember is one of those exceptions, thanks in large part to its two lead actors. If any romance could carry me away on the wave of a gooey love affair, this would be the one. The film is, essentially, the original tearjerker romance that set the tone for the films of that genre that we see today.

Nicky Ferrante (Cary Grant) is a rich and handsome playboy who has everything handed to him on a silver platter. He is constantly surrounded by women who want to be with him and men who want to be him. Although engaged to an heiress, Ferrante travels to Europe alone for a trip. On his return ocean cruise that is bound for New York, Nicky meets nightclub singer Terry McKay (Deborah Kerr). Over the course of a few days, the two fall in love despite the fact that both are in long-term relationships back home. They struggle to keep their clandestine affair a secret but soon the whole ship finds out and the two fear the news may be discovered by their significant others' back home in New York. Before parting ways, the two agree that, if they both still have strong feelings for one another in six months time, they will meet at the top of the Empire State Building. However, a tragedy prevents them from reuniting and the two are left wondering if they will ever see each other again.

The chemistry between Grant and Kerr is undeniable -- the two flirt and fight with equally charming zeal. Whether playing coy with one another or openly professing their love, they make the viewer believe that these two wealthy people truly could fall in love as quickly as they did. Their initial denial of their feelings for one another only makes their attraction stronger. Grant and Kerr were both seasoned British actors; however, their inability to mask their natural accents while playing Americans was, at times, a little distracting. But, outside of that one (minor) issue, the film revolves around Nicky and Terry and the lovely performances of Grant and Kerr. 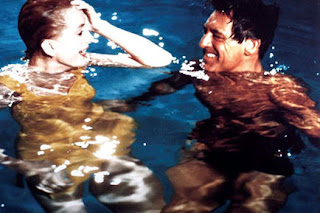 I found the film to be a series of highs and lows in terms of plotting. Despite its charming stars, An Affair To Remember is a little structurally uneven at points. For every lovely scene of character development (such as the wonderful extended scene where Nicky takes Terry to meet his sick grandmother) there is a distractingly unnecessary scene (the entire song and dance routine performed by the children that Terry teaches). The first half of the film is flirty and fun -- it's so enjoyable to watch Nicky and Terry get to know one another and struggle to keep their growing affection a secret from the gossip-seeking people aboard the ship. The film lags a bit in the second half when the two of them are separated. The script isn't strong enough to sustain the film if the two lead actors are apart. However, if nothing else, it does put the viewer on edge because we can't wait for the two of them to meet up again after so much time has passed.

The tragedy that prevents Nicky and Terry from meeting again six months after separating is exactly what you'd expect from those cliched romance films that insist on piling on the pain and strain of its two lovers. Back in 1957 I can see how this tragedy could have gripped an audience; however, watching it in 2011 is a little different. We've seen this plot device run into the ground -- a weak (although usually successful) attempt to manipulate audience emotion. Therefore, I had to try and watch it as though it were 1957, but the 2011 movie watcher in me rolled my eyes a little at the drama of it all. I found other moments in the film (such as that aforementioned scene with the grandmother) much more emotionally effective than the contrived tragedy that keeps Nicky and Terry apart.

However, something happens in the end to change the eye-rolling back into a genuine love for the film: Grant and Kerr make their final scene with one another work so well that you forget about the soggy, emotional drama that pulled them apart in the first place and just rejoice in the fact that you get to see them share the screen again. That type of magic doesn't happen in every film. The combination of talented actors and their natural chemistry with one another is what helps raise An Affair To Remember above and beyond your average, mediocre romantic film. As a result, it deserves its place as a Hollywood classic and not only for the influence it had on the romance genre, in general.

This is one of those "golden oldies" I really enjoyed, although I wouldn't list it amongst my overall absolute favourites.