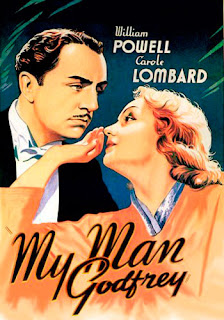 With the emergence of the "screwball comedy" in the 1930s, Hollywood discovered a sure-fire way to lift the spirits of an American populace struggling to survive the Depression. Audiences sought a reprieve from their daily hardships in the form of beautiful celebrities who had an effortless ability to make them laugh and transport them to another time and place.

It has been more than 75 years since My Man Godfrey was first released, yet it's the sign of a story well told when it manages to hold up for generations of new fans.

Working from a script based on the novel by Eric Hatch, director Gregory La Cava crafted a comedic masterpiece that manages to be both a sharp social commentary on the class system of the 1930s and a laugh-out-loud farcical romp.

When spoiled socialite Irene Bullock (Carole Lombard) crosses paths with Godfrey (William Powell), a "forgotten man" living in a city dump, she convinces him to accompany her a party teeming with the creme de la creme of New York society. Her reason? To win a scavenger hunt in which one of the items listed is to return with a homeless person. Irene is instantly infatuated with the mysterious Godfrey and convinces her parents (Eugene Pallette and Alice Brady) to take him in as the new family butler -- much to her elder sister Cornelia's (Gail Patrick) distaste. Irene takes Godfrey under her wing, referring to him as her "protege", much in the same way that her own mother addresses Carlo (Mischa Auer), a young Italian man she keeps around the house for her amusement. Godfrey is forced to endure the inane antics of the Bullock family -- the most alarming issue being the shocking advances made by Irene, who seeks to woo the butler into marriage.

My Man Godfrey is like a fine wine -- it's aged remarkably well for a film so firmly ingrained in 1930s society. You laugh along with its implausible situations and clever wordplay while considering its thoughtful commentary on social order. Even its remarkable cinematography has transferred well, with Ted Tetzlaff's rich visuals jumping off the screen.
However, it's savvy dialogue and physical comedy could have easily fallen flat in less capable hands. Luckily for audiences, La Cava's ingenious decision to cast screwball genre stalwart Carole Lombard and the charismatic William Powell paid off in spades. The fact that the two actors were once briefly married in real life prior to filming made the dynamic all the more electric.

Powell's razor-sharp delivery and straight-man comedic chops provides perfect fodder for Lombard's whimsical, slightly neurotic performance. Watching them engage in witty repartee and innuendos is the reason behind My Man Godfrey's designation as one of the greatest screwball comedies of all time. Lombard, in particular, shines in her role. In the hands of a lesser actress, the role of Irene would have come off as nothing more than a simpering brat unworthy of audience sympathy. Instead, you find yourself rooting for her happiness, despite her flaws and regardless of her obliviousness to the world around her.

The supporting cast fares just as well as the leads, specifically the maniacal frenzy of Alice Brady as Mrs. Bullock and the amusingly over-dramatic antics of Mischa Auer in the scene-stealing role of Carlo.

My Man Godfrey is pure unadulterated fun -- witty escapism at its finest. If only all films were this good.