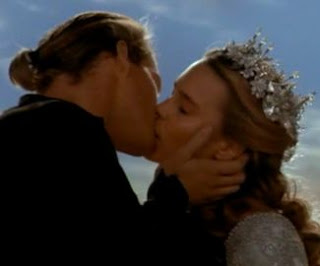 THE PLOT
Based on the novel by William Goldman, it chronicles the love story between Princess Buttercup (Robing Wright-Penn) and her "farm boy", Wesley (Cary Elwes). Set in a fantasy world that is narrated by Grandpa (Peter Falk), who is trying to distract his sick grandson by reading him The Princess Bride, Buttercup and Wesley must overcome "three poor circus freaks", a vile prince, a six-fingered man and the R.O.U.S. (Rodents of Unusual Size).

WHY I LOVE IT
I didn't even have to stop and think about what film couple would make the cut. I could have chosen something more dramatic or obvious, but none of them compared to this ultimate fantasy couple. This is one of those films from my childhood that gets better with age. I was only 6-years-old when my parents first introduced me to this comic fantasy and I've seen it so many times since that I could probably recite it word for word.

Despite its tone, the love story between Buttercup and Wesley is something I think we all yearn to experience ourselves at some point in our lives, even the most cynical of us. 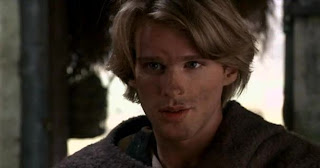 Their love is flawless, unconditional and, sadly, complete fantasy. However, despite its satirical tones and laugh-out-loud moments, neither Goldman's book nor Reiner's film can disguise the fact that, in both mediums, they've created one of the most ridiculously perfect relationships in literature and film.

The movie is excellent for so many different reasons, yet, despite being nearly overshadowed by larger-than-life secondary characters (like Andre the Giant as Fezzik or the wonderful Mandy Patinkin as one of my favourite film heroes, Inigo Montoya), Robin Wright-Penn and Cary Elwes always manage to turn the audience's attention back to their central love story.

As Mark Knopfler sings in the closing credits, it's a "Storybook Love."
Posted by Laura at 6:24 PM No comments: