I haven't seen as many silent films as I probably should, but the ones I have seen have been incredible. From The Great Train Robbery (1903) to German Expressionist films such as Das Cabinet des Dr. Caligari (1919) and Fritz Lang's Metropolis (1927), I've always been fascinated by the cinema's original masterpieces.

There is something beautiful, yet eerie and somewhat unsettling, about relying solely on silent, black and white images of long-dead actors running around with exaggerated make-up smeared on their faces. Acting was so different before the days of the "talkies." Actors were left to rely on their ability to express every human emotion through facial reactions. An audience couldn't hear an anguished cry or a laugh; the actor would have to be able to convey that with their face or body language. 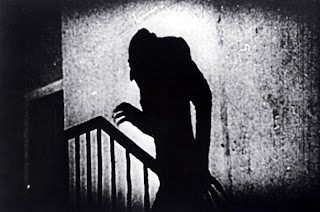 In 1922, German director F.W. Murnau (Faust) released, arguably, his most influential film. Nosferatu remains one of the most enduring horror films ever made. Murnau bought the movie rights to Bram Stoker's Dracula, until Stoker's wife officially took over the rights for the novel after her husbands death. Instead of scrapping the film altogether, Murnau and his screenwriters put their heads together and changed just enough of the details in their film to escape copyright infringement. Dracula was now Count Orlock (Max Schreck) and The Vampire (or vampyre) was now prowling the streets of Bremen, Germany instead of Victorian London.

The film is downright creepy. I saw it for the first time more than five years ago. I caught it on TCM late one night around Halloween. I was struck by how untraditional a vampire Count Orlock was compared to the elegantly caped and seductive Dracula. By contrast, Orlock was reptilian in appearance and socially awkward. It helped that actor Max Schreck was terrifying, both in his exaggeratedly slow movements and his actual physical appearance. I admire how Murnau and the cast and crew took a traditional story, gave it a German spin and made it more terrifying than any other vampire film based off of Stoker's novel.

The film is an absolute piece of art. Just watch the trailer and judge for yourself.


My second choice is City Lights (1931), Charlie Chaplin's greatest and most affecting film. Most people cite Modern Times (1936) as the definitive Chaplin, but in my opinion, nothing beats the wonderful comedy and pathos of City Lights. 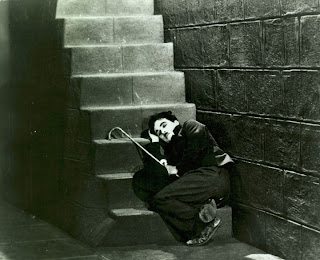 Although the "talkies" had been around since 1927 (with the release of The Jazz Singer, for those keeping track), Chaplin continued to make silent films well into the late-1930s. Chaplin had a face made for the silent screen. Not only was he a gifted actor and comedian, but he also directed each of his films, along with composing their scores and writing the scripts. Chaplin was the full package and his talent was never more on display that with City Lights.

The Tramp, Chaplin's onscreen alter ego, tries to woo a poor, blind girl by doing everything he possibly can to raise money for her so she can have an operation that will restore her sight. The Blind Girl (Virginia Cherill) has no idea who her young suitor is or why he is being so kind to her, but she welcomes his attentions thinking he's a handsome millionaire. This film was recommended to me by a friend who promised me that the ending would make me cry "happy tears" and it definitely followed through on that promise. While not as visually stunning as something like Nosferatu, Chaplin still manages to make City Lights one of the greatest films of all time, for its brilliant comedy and touching grand finale.

For those who don't mind being spoiled, here's the final scene of City Lights, when the Blind Girl realizes who that Tramp is and what he has done for her and the restoration of her sight.