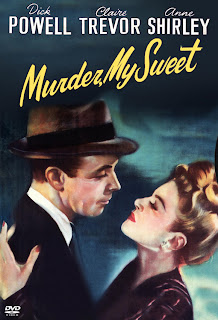 I'm continuing my ongoing film noir series. You can check out my post on the Next Projection website HERE. The second film on my list is Murder, My Sweet (1944).

This iconic and richly layered film from RKO Pictures remains a highlight of the film noir genre, with its famously glib antihero at the centre – a man with a witty one-liner for every insult thrown his way.

Based on the Raymond Chandler pulp novel Farewell, My Sweet, this highly quotable adaptation is a quintessential film noir. With screenwriter John Paxton at the helm, the sharply scripted Murder, My Sweet expertly weaves together what are essentially three separate narratives. The film utilizes the traditional film noir tropes, complete with a flashback framing narrative and descriptive voice-over narration. Director Edward Dymtryk created a moody, atmospheric masterpiece. You can practically smell the whiskey that the characters chug down. Dymtryk and Paxton neatly knit the loose narrative threads together and the end result is a dark, seedy and occasionally violent ode to the crime dramas of Raymond Chandler.

Private investigator, Philip Marlowe (Dick Powell), is hired by Moose Malloy (Mike Mazurki), a longtime crook recently sprung from jail after serving a lengthy sentence. Malloy is concerned about the whereabouts of his beloved moll Velma Valento, whom he hasn’t seen for the last six years. The case becomes a tougher nut to crack than Marlowe originally anticipated, leading him into a tangled web of deceit, bribery and theft.

The visuals lensed by cinematographer Harry J. Wilde explore the dark recesses of the human psyche through lavish visual concepts that literally reveal the state of paranoia in which Marlowe finds himself. A literal black haze moves over the screen as a fainting Marlowe narrates, “A black pool opened up at my feet. I dived in. It had no bottom.” His bizarre hallucinations are conveyed by overlapping imagery and cobwebs that seem to literally cling to the screen and blur the audiences’ vision.

Dick Powell portrays Marlowe as a world-weary “everyman” – even though his career may involve him in the happenings of the criminal underworld, his moral compass remains intact.
As Marlowe himself explains early on in the film: “I’m just a small businessman in a very messy business, but I like to follow through on a sale.” A former crooner in the musical genre, Powell was cast against type yet convincingly made the transition from a song-and-dance man to a P.I. antihero.

Anne Shirley plays Ann Grayle, a woman who teams with Marlowe when she discovers her father is involved in the mess surrounding the whereabouts of Velma Valento. Earnest and eager to help, Ann’s apparent naïve charm casts a spell over Marlowe, although her motivations are not always clear.

As Helen Grayle, Ann’s bombshell stepmother, Claire Trevor is flawless, the very embodiment of the femme fatale. She’s platinum blonde and all legs – she’s introduced to the audience sitting curled up on the couch, like a predatory cat waiting to pounce. With her plunging necklines, glittering jewels and overtly sexual haughtiness, Helen is the type of woman who could lure a man into a life of corruption.

And then there’s Mike Mazurki, an absolute revelation as Moose Malloy. The former professional wrestler was more than just a craggy face with a body built like a piece of concrete. He gives a touching performance as a lovesick criminal who just wants to be reunited with his girlfriend.

Murder, My Sweet is ultimately a higher breed of film noir – highly quotable, expertly paced and well acted. There are few finer examples of the genre.

FINAL GRADE: A
Posted by Laura at 6:42 AM No comments: