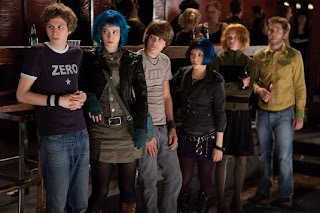 This review has been a long time coming, considering I saw this film nearly three weeks ago. Better late than never, I suppose.

When I first saw the trailer I didn't understand what all the pre-release hype was over. Sure, it looked pretty fun and I knew it was based on a graphic novel series, but it didn't seem like that big of a deal. I'll be the first to admit that the main reason I eventually went to see Scott Pilgrim vs. the World is because it was set in Toronto. It's so rare for a non-Canadian, mainstream Hollywood film to actually let Toronto play Toronto, as opposed to Chicago (in Chicago) or Baltimore (in Hairspray).

Based on the comics by Canadian Bryan Lee O'Malley and directed by Brit Edgar Wright (Shaun of the Dead, Hot Fuzz), the story revolves around 22 year old Scott Pilgrim (Michael Cera). All you really need to know about Scott is pretty straightforward: He's from Toronto. He plays bass for his band Sex Bob-omb. He lives with his gay roommate, Wallace Wells (Kieran Culkin). He's dating a high-schooler named Knives Chau (Ellen Wong), but he's in love with an American girl, named Ramona Flowers (Mary Elizabeth Winstead), who recently moved to Toronto. However, Scott soon learns that, in order for him to date Ramona, he first has to defeat all seven of her "evil" exes. Despite Ramona's obviously bad taste in men (and one woman) aside, Scott thinks she's worth the battle.

That's literally all a viewer needs to know about the plot. Scott Pilgrim isn't so much a film as a series of colourfully vibrant vignettes. Scenes move at a rapid pace and not all of them actually add anything of substance to the plot; however, this isn't necessarily a bad thing. If you are looking for vivid characterizations or a complex plot, you aren't looking in the right direction. Scott Pilgrim plays out the way one would expect great summer entertainment to play out: action sequences, comedy, romance and the battle of good vs. evil. What's not to like?

For Torontonians, there are plenty of in-jokes and famous sites that only we may fully appreciate: from Casa Loma to Honest Ed's to Pizza Pizza to Second Cup and the prominent use of the TTC, the film isn't so much a "love letter to Canada" as some international critics have been saying, but a "love letter to Toronto." Our city was transformed into a winter wonderland full of swirling colours, fierce battles between local garage bands and, apparently, a safe haven for people with the ability to kick ass.

The cast is what makes Scott Pilgrim work so well. Granted, Michael Cera is essentially playing another version of himself, yet there was something a little more ironic about his performance this time around. It felt more like a send-up of his earlier, endearingly awkward roles, as though Cera himself realizes he's been typecast one too many times. The supporting cast is all strong, especially Kieran Culkin as Wallace and Ellen Wong as Knives. With the force of both of their comedic powers, they almost steal the entire film out from under Cera's feet. Wong, a Scarborough native making her film debut, is almost impossibly adorable as the deceivingly innocent girlfriend to Cera's Scott. She plays Knives as a teenage neurotic; a hyperventilating mass of energy, love and devotion. You almost expect her to explode into a million pieces at any moment. As Scott's best friend and gay roommate, Wallace, Culkin is so wonderfully hilarious you almost wish he got to be more of sidekick to Scott. His droll, dry sarcasm and one-liners work so well simply because Culkin knows how to play the character. In the hands of anyone else, Wallace could have been an annoyingly smart-ass stereotype. I haven't seen Culkin this good since Igby Goes Down.

The only two characters that really suffer from lack of great lines and anything resembling character motivations is Ramona and Kim Pine. Mary Elizabeth Winstead doesn't do much other than scowl and change her hair colour. It's a little hard to understand what exactly Scott sees in her in the first place. Kim Pine (played by Alison Pill, who is usually wonderful in smaller roles), on the other hand, is one of Scott's ex-girlfriends and all she does is scowl, play the drums and pretend to shoot herself in the head. She's probably the most pointless character in a film full of secondary characters running around, competing for attention.

The movie is, essentially, a live action video game, albeit one from the 1980s (think Super Mario Brothers or Pac-Man). I'm no gamer, but the majority of the references are funny and clever enough for anyone with a knack for pop culture to pick up on. Who wouldn't love a movie that also includes the KAPOW! of punches thrown, a la the 1960s Batman. Plus, any movie that includes defeated villains exploding into a pile of loonies and toonies earns extra brownie points in my book. If nothing else, it's movie made by geeks for geeks.