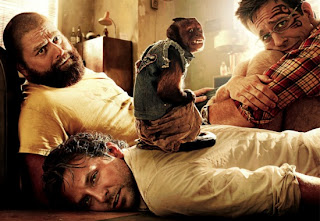 Have you seen 2009's The Hangover? If so, than I can assure you that you can go through the rest of your film-loving life without having seen The Hangover 2 without missing a thing. Both films are so identical that the only real differences are the location (moving from Las Vegas to Thailand) and the groom-to-be (now it's Ed Helms' nice-guy dentist, Stu).

The "Wolf Pack" is reunited for the upcoming nuptials of Stu (Ed Helms) and his bride, Lauren (Jamie Chung). Originally from Thailand, where most of her family still resides, Lauren prefers the wedding to be located in her home country, so Stu gathers together his closest friends and relatives to make the trek overseas. After the Las Vegas debacle two years ago, Stu prefers a Bachelor Brunch -- no alcohol, just coffee and eggs. But, when a campfire get-together with his pals Phil (Bradley Cooper), Doug (Justin Bartha), Alan (Zach Galifianakis) and the bride's 16-year-old brother, Teddy (Mason Lee), takes a turn for the worse the gang finds themselves lost in Bangkok with a drugged up Mr. Chow (Ken Jeong, reprising his role from the first film) and a cigarette-smoking monkey as their only companions.

There's not much to say about this film, a literal rehash of the 2009 surprise blockbuster hit. Clearly nothing more than a summer cash-grab by studio executives, The Hangover 2 has few laughs and, more than anything else, leaves the viewer with a severe case of deja-vu.

Although the film has a couple of funny moments, for the most part the script contains only a barrage of swearing and a couple of cringe-worthy racist and homophobic remarks. The first half of the film moves forward at a rapid-fire pace; however, by the second hour the plot drags and you just want the guys to get Stu to his wedding on time so everyone can move on. Although the film isn't quite as atrocious as some critics have claimed (Peter Howell of the Toronto Star, for example, gave it only one star in his review), it's definitely no match for its much funnier and much more original predecessor. More than anything else, it's a disappointment.

Sometimes it's best to leave well enough alone, especially when considering the fact that The Hangover was embraced by critics and audiences alike -- a rarity for comedy films, especially ones with a premise involving drunk, immature men in their 30s. Alas, that's not Hollywood's style. Instead, they must beat a joke to a messy pulp, making all the money they can in the process, before leaving it alone and moving on. And that's a shame. With the monstrously popular opening for The Hangover 2 this past weekend (the film pulled in nearly $85 million in only its first four days of release), the inevitable third chapter is likely already in the works. It's safe to predict that it will be set in another yet another exotic location, featuring a new groom (Alan, perhaps?) and identical antics will ensue.