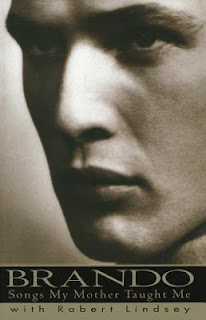 "I can draw no conclusions from my life because it is a continually evolving and unfolding process."
- Marlon Brando, Songs My Mother Taught Me

It seems strange that, back in 1994, Marlon Brando agreed to reconstruct his own life into book form (albeit co-written by New York Times columnist Robert Lindsey). Seventy years old at the time it was published, Brando only agreed to the project if he was excused from making any mention of his three former wives or 10 children -- he was adamant that the privacy and protection of his loved ones remain intact. As a result, Songs My Mother Taught Me is the rare celebrity autobiography that doesn't make detailed mentions of torrid romances or resort to name-dropping.

The famously private and reclusive actor often shied away from the spotlight, preferring to wile away his hours on Teti'aroa, his private Tahitian island, or within the confines of his gated Hollywood mansion -- unless, that is, it concerned his political beliefs or a group of people he believed needed to be defended in public.

In the introduction of his autobiography, Songs My Mother Taught Me, Brando makes a point of stating his real reason for agreeing to the book (published by Random House): he wanted the profits to go towards one of the numerous causes close to his heart, namely the American Indian Movement (AIM). Brando wanted to use his celebrity for good -- and made sure his readers were aware of that fact.

It's hard to envision someone like Brando sitting at a computer, typing away his many adventures and misadventures. For anyone who has followed the actor's career closely, it just doesn't seem like his style. Although Brando never admits it, I find it likely that he related his stories to Lindsey orally, while the journalist culled together a cohesive narrative from his various anecdotes. The end result is an often compelling, sometimes frustratingly vague, account of a life that involved a broken home, a career in film, multiple failed marriages and a passion for political causes -- including a (controversial) stint with the Black Panther Party.

I was initially skeptical about Brando's sincerity when, early on in the book, he starts casually brushing off the accolades he received over the years as an actor -- or when he claims that men like Shakespeare and Beethoven were true artists, unlike actors who mug for the cameras for money and business tactics. Yes, Hollywood is a business. However, I find it hard to believe that Brando can be so flippant about how he made his bread and butter considering he quite often took acting very, very seriously -- by introducing the Method to North America (with the help of the legendary Stella Adler) and virtually disappearing into roles like Terry Malloy and Vito Corleone.

However, as you get further into Songs you begin to realize that Brando remained true to his word -- he says very little about Hollywood, instead focusing on his later years on Teti'aroa, his role with the American Indian Movement and his musings on the Vietnam War. It takes the reader about 50 pages to understand where Brando's true interests and passions lie -- and that his seemingly false modesty is really a form of brutal honesty. He truly appreciates that he was able to make a lot of money in his chosen profession, yet he always made the conscience decision not to let it rule his life.

In Songs Brando is at his most candid when talking about himself -- he openly displays both his inflated ego and the events that have left him humbled.

And while Brando takes the high road when it comes to discussing intimate family and friends by refusing to even mention them by name out of respect for their privacy (a classy move reminiscent of loyal Hollywood friend Elizabeth Taylor), he does offer tantalizing tidbits on legends like James Dean and Marilyn Monroe.

He acknowledges Dean's borderline-obsessive fascination with him and his acting abilities. Brando admits to being uncomfortable at Dean's middle-of-the-night phone calls and his constant mimicking of Brando's lifestyle.

On Dean: "He was tortured by his insecurities, the origin of which I never determined... once he showed up at a party and I saw him take off his jacket, roll it into a ball and throw it on the floor. It struck me that he was imitating something I had done..." (p. 224).

Brando reveals very little about conversations that took place between him and Dean. He alludes to one particular late night chat that revealed much about Dean's personality, but pulls back from sharing too much. Whatever was said between the two, Brando took it with him to the grave. He was true to his word about not revealing salacious details about family and colleagues, even the ones as long-deceased as Dean.

He offers even less information about his brief romance and friendship with Monroe, saying only that he was one of the last people to talk to her before she died in 1962 and that he firmly believes she was murdered -- stopping just short of directly pointing his finger at the Kennedy clan.

Songs is somewhat chronological, but it's mostly a narrative of loose thoughts stitched together. What I didn't expect was how much Brando would reveal about his political colours and how willing he was to open up about a childhood spent with alcoholic parents. His memories from his youth are particularly compelling as they are random snippets of childhood, both beautiful and sad, that feel so genuine and relatable.

On his mother: "My mother was always unconventional. Sometimes when it rained, she wore a shopping bag over her head with a little visor she had torn at the corners; it was absurd, but she thought it was funny. I was always embarrassed by it, though if she did it today, I'd be gasping with laughter." (pp. 4-5).

In the end, Brando's autobiography is not your traditional celebrity tell-all. There are many questions left unanswered, specifically when related to his career and personal relationships. But he more than makes up for the gaping holes by taking genuine pleasure in sharing with readers his love for Tahitian culture, his passion for the American Indian Movement and his affection for his (long deceased) pet raccoon.

What you walk away with after reading Songs My Mother Taught Me is the sense that Brando, despite all his wealth and talent, really was just an average boy from Omaha, Nebraska who tried to lead a good life, yet made many very human mistakes along the way. He doesn't hide behind his errors in judgment (like the time early in his career when he slept with one of his stalkers) nor does he apologize for the person he is, and that just makes him so normal -- and it's also what makes his autobiography so refreshing to read.

NOTE: Songs My Mother Taught Me is now out of print. I purchased my copy at a Toronto film memorabilia store, The Hollywood Canteen. You can also buy it from sellers on Amazon.
Posted by Laura at 11:51 AM 2 comments: