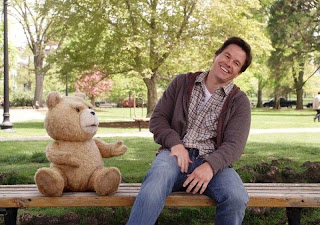 Given the enduring popularity of TV's Family Guy and its creator, Seth MacFarlane, it was inevitable that the comedian would eventually make the leap from the tube to the big screen. With Ted, MacFarlane writes and directs his debut feature with mixed results.

When John Bennett (Mark Wahlberg) was a child he made a Christmas wish that his favourite teddy bear would come to life and be his friend in real life. Easily the loneliest boy on the block, John is thrilled when his wish comes true. Now in his mid-30s, John is a slacker who spends his days smoking weed, watching Flash Gordon reruns and trash-talking with his foul-mouthed bear, Ted (voiced by Seth MacFarlane). Even John's incredibly patient girlfriend, Lori (Mila Kunis), has reached her limit and wants him to make a choice: Her ...or the teddy bear.

Fans of MacFarlane will undoubtedly leave the theatre satisfied -- the flick is as crass and vulgar as any Family Guy episode, only times a hundred. Ted may look like a cuddly children's toy but he has no filter, spewing out raunchy one-liners and thumbing his nose at political correctness. While some jokes hit their mark, there are those that fall far short of the target -- behaving badly doesn't always equal laughs.

Those uninitiated in MacFarlane's particular brand of humour are still bound to find some moments amusing -- although the majority of the best lines can be found in the movie's trailer. While Ted does have its laugh-out-loud moments, for the most part it's a bunch of haphazard comedy vignettes, centred around a talking teddy bear -- a narrative that eventually wears out its welcome. It's thin premise only carries the flick so far, as evidenced by a random, tacked-on, unfunny kidnapping subplot involving a creepy Giovanni Ribisi in the latter half of the film that threatens to collapse the whole flick. 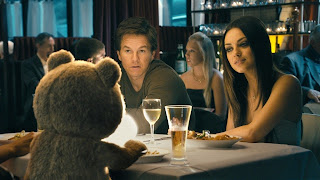 If there's anything keeping Ted afloat, it's the effortlessly energetic charm of Mark Wahlberg. There's something to be said for watching an actor have a great time in a particular role. Ted is a welcome departure for the action flick vet who knows how to sell a one-liner and generate his own laughs -- with or without the help of his little bear friend. Using his natural Boston accent, Wahlberg nearly steals the movie right from under Ted's fuzzy feet.


However, in the end, Ted tries too hard to shock the laughs out of its audience with its excessive (and ultimately redundant) attacks on everything from bullied,overweight children and the gay community to "kid cancer." By the end, you may be a little worn thin from the constant barrage of rapid-fire pop culture references.


Perhaps Ted would have worked with a shorter running time (or half hour television episodes?). And, while it does have its fair share of laughs, this bear does better in small doses.