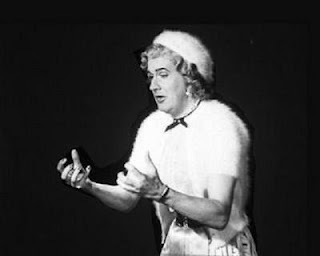 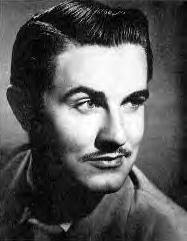 I know very little about the life of the notoriously terrible film director, Ed Wood. What little I do know is gleaned from Tim Burton's 1994 tribute, Ed Wood, and various small articles and tribute videos floating around the Internet. But from what I do know...he makes for a fascinating Hollywood eccentric.

The infamous Mr. Wood has been the subject of numerous biographies, documentaries and films focused on his eccentricities and general awfulness. Ever since he passed away of a heart attack at the age of 54 in 1978, Wood has achieved an astounding cult status only a select few people ever obtain.

Known for his showmanship and his ability to attract every oddball in Hollywood, Wood "won" the honour of the Golden Turkey Award for Worst Director of All Time in 1980, only two years after his death. This only cemented his rise in popularity after his death.

The first film to bring Wood fame (or, rather, infamy) was based on the true story of Christine Jorgensen, the first well-known person to go through sex reassignment surgery. The initial working title was I Changed My Sex! (complete with exclamation point). Wood convinced producer George Weiss that he had something special that only he could bring to the film. That little special something? Wood's own secret desire of dressing as a woman (something his close friends and second wife, Kathy O'Hara, insisted was not a sexual inclination, but an emotional connection to angora material).

Wood immediately wrote the script and cast himself in the lead. The only problem was that Wood made the film more of an autobiography, veering away from the original premise. Wood retitled the film Glen Or Glenda and it was released in 1953 in only three American states. Surprisingly, the film co-starred former horror film legend, Bela Lugosi. Best known for his role as the original Dracula and his alleged rivalry with Boris Karloff, Lugosi appeared in the film both for the desire to work again (he hadn't appeared in a motion picture in nearly five years by that time) and as a favour to his new, vibrant young friend, Ed Wood.

Throughout the film, Wood appeared in full women's clothing. Despite its unpopularity it gave Wood the confidence boost he needed to start appearing in public in drag. His alter ego was Shirley and he would often direct in a full dress and wig.

Bride of the Monster (originally titled Bride of the Atom) was Wood's own brainchild. It starred Lugosi in his last speaking role. He played a mad scientist who wanted to create his own super-race. Every horror story ever told about the hardships of bringing this film to fruition are true. The backdrops were all hand-painted, the 400-pound Swedish wrestler Tor Johnson knocked over many of the set pieces during filming and Lugosi actually did have to thrash around in freezing water with a fake octopus despite the fact that he was old, frail and cranky due to his drug addiction. Even more noticeable was the stock footage of alligators and octopuses randomly inserting itself in the film. Released in 1955, Bride of the Monster was reviled.

Plan 9 From Outer Space, for which Wood is most famous, debuted in 1956. Originally, Wood wanted to film his script The Ghoul Goes West, but turned back to his Plan 9 script when a southern Baptist church group agreed to pay for the production with the promise that the film would be such a huge success that they would be able to make a film series on the 12 apostles of Jesus Christ. Wood and the Baptists made an unlikely pairing.Lugosi died before filming so Wood inserted stock footage of the late actor and hired his chiropractor to be Lugosi's stand-in. Terrible sets, lousy acting and an incomprehensible script helped lend a hand to the cult status it would eventually achieve.

Part of Wood's legend is his genuine friendship with Bela Lugosi. While some accused Wood of stringing along a frail, drug-addled old man who was desperate for Hollywood to want him again, Wood helped Lugosi through the worst period of his life. Through the duration of their friendship, Wood comforted Lugosi when he overdosed on drugs and convinced him to enter into rehab to get sober. Wood was one of the few people who attended Lugosi's funeral. Hollywood may have forgotten the former horror legend, but Wood was loyal to the end.

After Lugosi's death, Wood's fan base dwindled and the director turned to heavy drinking for comfort. He made a series of pornographic films and wrote sex novels for as little as $100 in an attempt to make as much money as he possibly could. By this time, Hollywood was officially done with Edward D. Wood Jr. He fell deeper and deeper into depression and alcoholism before succumbing to a heart attack. The last years of his life were marred by financial instabilities and empty attempts at making films that mattered to him. Wood was survived by his second wife, Kathy, and his daughter.

His ashes were scattered in the sea. Plan 9 and its cult status reached fever pitch. It even revived Lugosi's cult status.

FUN FACTS:
++Wood's mother always wanted a daughter and, when he was 12, she started dressing him as a girl when he was at home.
++He considered himself a heterosexual transvestite.
++He had a fetish for angora sweaters.
++Wood fought in the Second World War and participated in the Battle of Guadalcanal...while wearing women's underwear and brassieres (he didn't fear death; his only fear was that people would discover his secret).
++He was missing his top four front teeth and had a disfigured leg.
++Upon returning from the Second World War, Wood joined a freak show. He played the role of the Bearded Lady.
++Glen Or Glenda and Plan 9 have both been remade into porn films (Glen & Glenda and Plan 69 From Outer Space).
++In 1996, Reverend Steve Galindo founded the Church of Ed Wood. There are over 3500 baptized followers in Sacramento, California, where it was established. Worshippers refer to themselves as Woodites and celebrate Woodmas on October 10th (Wood's birthday).
++In 1998, the film I Woke Up Early the Day I Died was released. It was based on a Wood script. The film starred Billy Zane and Christina Ricci.
++The University of Southern California hosts an annual Ed Wood Film Festival.

SUGGESTED READING:
"Nightmare of Ecstasy: The Life and Art of Edward D. Wood, Jr."
By: Rudolph Grey
Posted by Laura at 9:10 PM 3 comments: